Love Actually is now touted as “one of the greatest Christmas films of all time”, I assume, by the beige, easily-pleased titterati. When this flick was first released, there were loads of folk declaring how mediocre it was, but in recent years, Love Actually has unfathomably snowballed into an overrated festive juggernaut, crashing through the yuletide telly schedule with its suited, upper-middle-class, work-do aesthetic, replacing genuine Xmas fare with its bourgeois blandness. I’m tempted to call Love Actually “vanilla” but it isn’t because vanilla has a pleasant taste. You could say it’s as colourless or as tasteless as water, although it’s not because water at least quenches your thirst. Love Actually does nothing for the eyes, the mind, or the soul. It’s vapid, insipid, Christmas-spiritless, half-(mince)-pie, hum-(bug)-drum shite. In my opinion there’s nothing remotely Christmassy about seeing a gaggle of posh white people who shop at Waitrose twatting about in London with the superficial backdrop of winter. Even glancing at the title has my brain reciting it back to me with a southern-snob accent… “It’s love, actually… yah, yah, it ruddy well is” like one of those Sloane Rangers or Hooray Henrys would say.

This film is one of the worst creations by the once-decent Richard Curtis, who ironically, did create a Christmas classic in the form of Bernard And The Genie, a proper Christmassy TV movie that has yet to be rebroadcast by the BBC since its initial airing in 1991. With the prezzies unwrapped, Christmas dinner in the oven, I’ve been annually lamenting the absence of Curtis’ best work on the idiot box, but instead I’ve come across this dog’s dinner on at least one television channel without even searching for it. Love Actually for some unknown reason, is now a go-to festive flick for banal British broadcasters who these days, are as uninspired and unremarkable as the movie itself. When watching, you can at least console yourself with the slightly humourous gift wrapping scene featuring Rowan Atkinson but I’d rather see him as Charles Pinkworth any day.

With the opening titles looking like an advert for a budget funeral or an ad for private healthcare, this anthology of misery begins with a random prologue about “love”, and the ensuing story (or stories) then attempt to shoe-horn Christmas into the mix. With a weird title that reads “love actually is all around”, along with the Chrimbo song sung by character Billy Mack, we’re bombarded by references to Richard Curtis’ previous overrated picture. The same shit band (Wet Wet Wet) and their same shitty song (“Love Is All Around”) as Curtis’ Four Weddings And A Funeral forms part of this movie, not only in a promotional and self-congratulatory way, but also as a reminder of Rich’s creative downfall. Bill Nighy’s intentionally crap rendition of the track plays incessantly throughout and yet this isn’t the worst aspect of this travesty.

The main problem is Love Actually has little to do with love; there’s stories about sex, sellout friends, cheating and potential cheating, a school crush, death, and the extreme imbalance of power in a workplace relationship. But there’s a difference between lust and love, coupling and love, or indeed, the fear of loneliness and love. A haphazard movie concerning the start and end of relationships isn’t a film about “love” by any stretch of the imagination, it instead comes across as arbitrary slices of drab British life. And what does any of this have to do with Christmas? Yes, there’s fleeting scenes with presents and cards littering the set but the plot could conceivable be set during the Ten Days Of Teshuvah or World Menopause Awareness Month with the same end result; boredom and an inability to capture the mood of the season.

The plot is also in the realms of fantasy with the admittedly “ugly” Colin (Kris Marshall) and odd-looking Sam (Thomas Brodie-Sangster) batting way out of their leagues, not to mention the common tea-lady-slash-assistant Natalie (Martine McCutcheon) having a shot with a rich, Oxbridge leader of our country. I’m not against celluloidal make-believe, but for a film to open with a mention of real-life terrorism to then veer-off into men’s sexual fantasies about bagging any women (or multiple women) they come into contact with, regardless of their own looks, age, language, country, or class, is a fucking tone-shift of skyscraper proportions.

The opening narration by Hugh Grant who plays the Prime Minister (during a scene which is set in an airport no less) mentions the September 11th Twin Tower attacks, and yes, this was vomit-inducing to sit through even back in the day. Hollywood writers, directors, producers (along with musicians and of course politicians) couldn’t help but bring-up this event at the oddest of times, presumably for red, white, and blue non-brownie points. With writers tripping over themselves to declare their allegiance to the USA, this period of recent history felt like contemporary McCarthyism with anyone anti-war being looked down upon with contempt and unpatriotic suspicion. Unlike lots of other “entertainment” of the day, thankfully Love Actually doesn’t delve into the jingoism and Islamophobia which was rife in the 2000’s. Although during the time of its release, Hugh Grant’s P.M. looked, at least to me, like a filmic representation of Tony Blair, at the very least a satirical mimicry with a hint of propaganda; making our leader seem like a young, man of the people who dances to The Pointer Sisters in Number 10 Downing Street (and who has the balls to stand-up to the American President). This I’m almost certain, went some way to assuage Blair’s warmongering, his real-life sucking-up to the U.S. and his soon-to-be I.D.-card-recommending. Let’s face it: back in the noughties, this kind of middle-of-the-road shite only appealed to Blairites; fake-liberal, centrist-Labour twats scared of black terrorists but cheering a white boy running though airport security at their local multiplex, his complexion alone enough to absolve him of suspicion, evade a thorough cavity search, and avoid extraordinary rendition.

With the poster promoting this shite as “The ultimate romantic comedy”, this isn’t Coming To America or Groundhog Day, far from it. If you enjoy forgettable romcoms like The 40-Year Old Virgin or Notting Hill, this may appeal to you. To everyone else, this is almost sterile nothingness from beginning to end.

I’ll concede that there are some talented actors in the gargantuan cast – Alan Rickman, Chiwetel Ejiofor, Laura Linney – but the script is so lacklustre that it’s hard for anyone to give a standout or memorable performance. The fact that every TV-twit from Marcus Brigstocke to Ant & Dec are also present for acting duties, it’s not like the genuine actors have to try that hard. This was most likely an easy payday for most of them, and it shows.

Then there’s the music. With a score that in parts sounds as though Harry Dodson should be in a greenhouse in the background somewhere, we keep going from sombre to upbeat like a schizo wedding DJ. With Dido, Sugababes, Justin Timberlake, Norah Jones, The Calling, Kelly Clarkson and Wyclef Jean playing during scenes, even the soundtrack is millennial pop garbage, and like the film, it doesn’t manage to evoke the Christmas feeling one little bit.

A decade after all the mixed reviews, Love Actually is strangely, no longer seen as throwaway saccharine. It’s now mentioned alongside the likes of Scrooged and A Christmas Story which it clearly shouldn’t be. I also have to mention the kinda-Risky Business dance and the almost-Bob Dylan “Subterranean Homesick Blues” cue cards scene, which along with the movie itself, have become warped, so-called classic moments despite them being copied from better sources. Even the supposedly interconnected stories and characters don’t pan-out or pique one’s interest. This isn’t on-par with John August’s Go or Quentin Tarantino‘s Pulp Fiction, although someone has created this handy chart to show you how everybody’s linked (which you can stare at as you watch this pish for the umpteenth time, presumably off your tits on eggnog)… 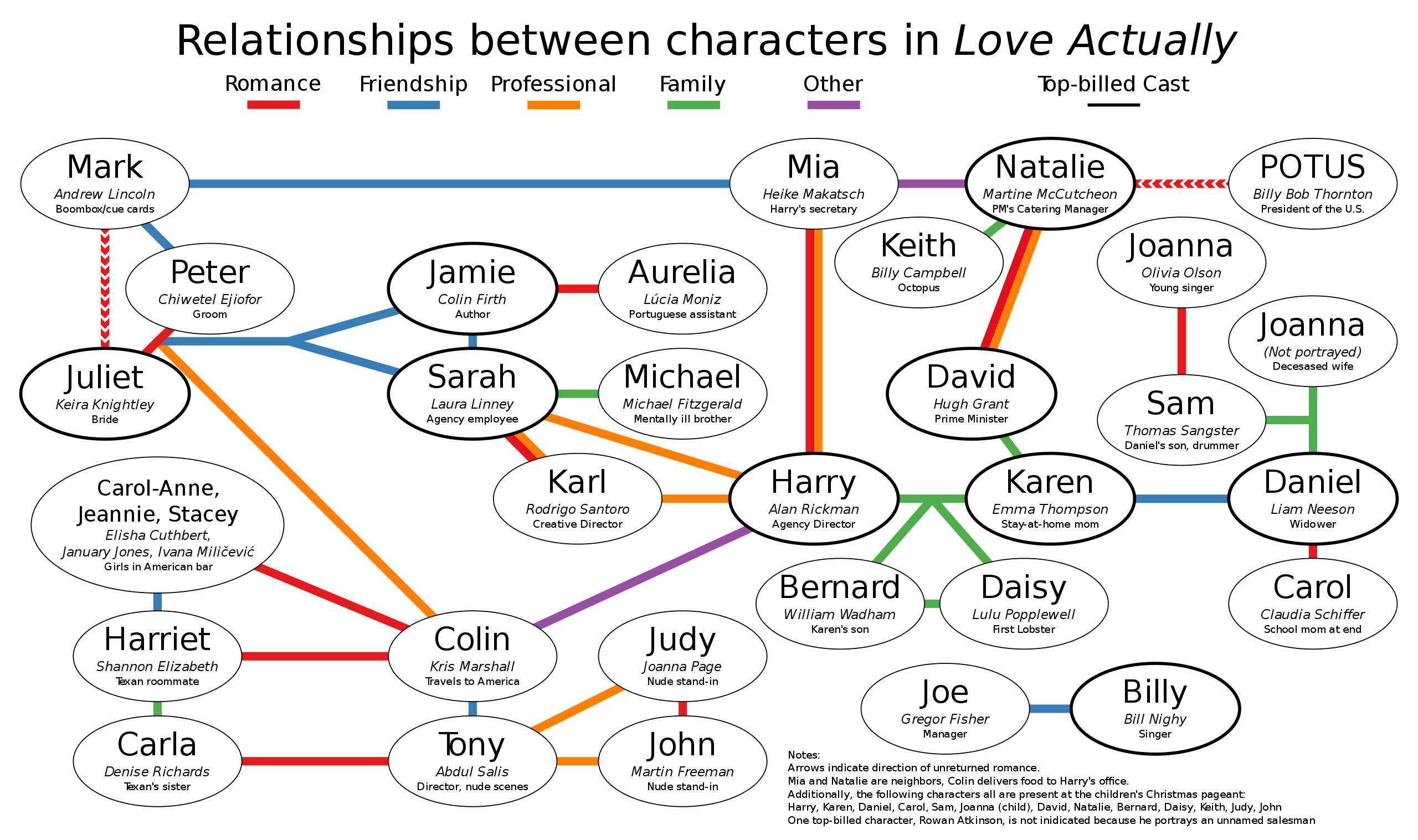 In recent years it’s become popular to argue over whether a film like Die Hard is a Christmas movie or not. If being set in the lead-up to Christmas isn’t enough for a film to qualify, or if a lack of snow is a factor, Love Actually doesn’t meet these requirements either. Yes, there’s the buying, wrapping, and giving of presents, there’s a parody of the UK Christmas Number One, there’s even a school Christmas play, but this film’s overriding message is “get in a relationship because blushing, hugging, boinking, marriage, infidelity, divorce, and then death is what life is all about” which doesn’t conjure-up the Yuletide any more than its subplots of an exaggerated and unbelievable workplace romance or going to another country on the (dreamlike) pull. And if the writer’s intention was for the narrative to be about “love” in the true meaning of the word, it begs the question: why shouldn’t we love one another from January to November? Why should we only show compassion, conviviality, and charity at Christmas? Two hours and fifteen minutes later, there’s no frigging answer. Ah well, time to go and have a cry-wank at Heathrow arrivals, like Richard Curtis seems to do.

So if you find yourself watching Love Actually during these latter months, like the exchange between characters Billy and Joe in the recording studio during the start of the film, you have to admit; “This is shit ‘int it?”. And given the two hundred million plus this crap has earned at the box office, the answer is; “Yup, solid gold shit”.

This is a previously unpublished review from 2013. It was supposed to be posted after the Richard Curtis article but I instead concentrated on finishing the Bernard And The Genie review so this remained unfinished for a number of years. I’ve added sentences to reflect the retrospective overrating to bring it up to date.