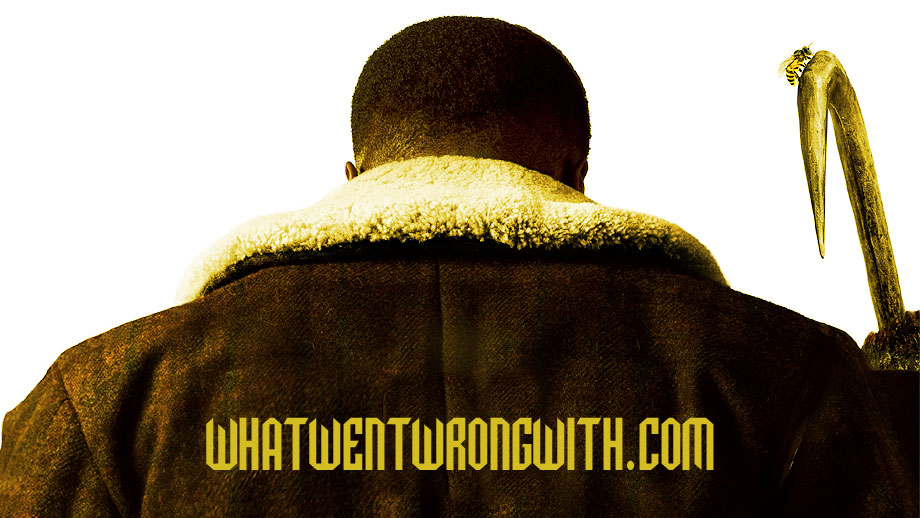 Seeing the quote “The Year’s Get Out” written over the poster, I took this to mean that Candyman is this year’s overrated horror movie that cliched white liberals will enjoy and typical white, anti-BLM conservatives will hate. Taking a look at the Google reviews, I think I’m correct. The latest Candyman isn’t the worst film around but it’s not great either, which is disappointing given the potential blending of relevant politics with the horror genre. Unfortunately, Candyman isn’t His House (2020), another recent horror movie about racism and bigotry. His House had oodles of atmosphere, lots of jump scares, a talented cast, and a pertinent message. All Candyman has is atmosphere, some talented actors, a few quotables, but a muddled plot that doesn’t know whether its a horror, drama, satire, or comedy.

The 90’s version of Candyman was a slightly above-average film, it wasn’t a classic, and aside from the “say his name five times in a mirror” concept, Philip Glass’ beautifully haunting score, and Tony Todd’s warm, commanding voice, it wasn’t much to write home about. Candyman 2 (Farewell To The Flesh) was abysmal and I haven’t seen whatever crap they made after that, or for that matter, read the Clive Barker book on which this tale is based. The fact that a black slave who was tortured and murdered by a white lynch mob with honey and bees then shows-up in a mirror and kills people irrespective of their race who merely say his name, showed what kind of nonsense this plot was. Fixing this, you’d think, would be a cinch but Jordan Peele, Win Rosenfeld, and Nia DaCosta have muddled it up even more.

So is this a sequel or a reboot? During its production it was labelled a “spiritual sequel” but now it’s called a “direct sequel”. I have no idea if the plot was changed as they went along, but the end result is now a mish-mash of new and old ideas and an attempt at honouring the original which sadly fails. 2021’s Candyman is all about a gentrified neighbourhood, an artist trying to recapture the magic of his previous work, and a local tragedy in the form of an innocent yet dodgy bloke who was blamed and then murdered for putting razor blades in children’s candy (which is an urban legend dating back to the 1950’s and a Fat Joe lyric). There’s also some M. Night Shyamalan‘s Lady In The Water-esque critic-bashing but it’s not as humourous or as satirical as the art critic story in Dr. Terror’s House Of Horrors (1965).

The film starts off promising, with slow, mood-building and some beautiful photography. The misty or foggy cityscape for example, is magnificently eerie but also very reminiscent of a short film named Regret by Santiago Menghini. There’s lots of shadow puppetry which reminded me of The League Of Gentlemen Christmas Special and A Monster Calls (2016) and this holds the narrative together from the opening to the closing credits in a poetic and artistic way.

Everything set in 1977 (especially the opening) has a brooding and historically accurate feel to it and I’d have preferred more of the film to be set back then. Some of the editing which smacks the past up against the present (which is 2019) ruins the flow of the movie. Seeing flashbacks before a scene rather than intercutting them, makes for a choppy viewing experience. There’s also fleeting commentary about controversy selling (there’s no such thing as bad press) and a parental suicide backstory for one of the supporting characters but these are unnecessary and unneeded additions.

There’s no ignoring that the story has too many unconnected elements. Our artist Anthony (played by Yahya Abdul-Mateen II) is said to have a poor background but is currently living in an up-market area with his art gallery curator/director girlfriend Brianna (played by Teyonah Parris). The fact that gentrification is said to be thanks to “artists” and both our black leads are in that field, means we stray away from the topic at hand. Oddly, there’s a comment about art created by people of colour having to be ethnic or political, otherwise it’ll be shunned by the snobbish art world. Ironically, this says a lot about this film and contemporary Hollywood. Most films, especially by new film-makers, have to fit into contemporary race and gender issues or they’ll never get green-lit. In some ways it’s refreshing to have the Shyamalans, Fuquas, and Lins of the world. But I digress.

Originally written by a white, gay, Liverpudlian bloke (Clive Barker) I’ve always found an element of bondage and S&M in his work. You’d think that torture would be the worst thing to happen to a human, but in films directed by Barker himself, the pain is never portrayed as, err… painful. Candyman whether intentionally Barker-esque or talent-less, never raises the audience’s pulses or makes us squirm as we see horrific things being done to characters who’ve done no wrong. To be completely devoid of emotion as we see people being mutilated means this film lacks spirit.

Directed by Nia DaCosta, there’s a decent and apt atmosphere generated during the first act. Ultimately however, there’s nothing here that puts it in the horror category or for that matter drama. There’s nothing frightening, no tension, and not much dramatic intensity. As a wannabe body-horror, there’s the slow deterioration of skin and the hiding of wounds a la Frankenstein: The True Story (1973) and Shaun Of The Dead (2004) but thanks to crappy latex makeup and the cold direction, it doesn’t ever feel painful or icky. An artist with no hand is a horrible prospect (watch The Hand (1981) starring Michael Caine) but this too is handled without any sadness or distress.

In terms of acting, there’s a few decent performances but everyone from the lead Yahya Abdul-Mateen II to the sometimey Candyman played by Michael Hargrove gets outshone by the beautiful and talented Vanessa Estelle who plays Anthony’s mother. Vanessa doesn’t look old enough to be his mom, in fact seeing them side-by-side reminded me of the father-son characters in Don’t Be A Menace To South Central While Drinking Your Juice In The Hood. For the short time she’s on screen, Estelle brings presence and pathos to the film. Sadly there’s nobody else who comes close to her acting talent.

After bastardising Da Luniz’ “I Got Five On It” for Jordan Peele’s Us, Candyman‘s original trailer had Destiny’s Child’s “Say My Name” in it, making this franchise look like a corny trash-fest (which I guess it is). The new trailer above, goes back to the iconic Philip Glass score but it’s not really in this movie. Instead there’s a forgettable score by Robert Aiki Aubrey Lowe.

Despite all the problems, there’s some great commentary on race and politics. The line “they love what we make but not us” is so true they should carve it into the entrance of every music company, every film studio, every sports stadium, and every clothes store. There’s a brilliant line by Anthony when he asks an art critic “who makes the hood?” and the art critic herself speaks disparagingly about artists “dicking around” which all ties into the gentrification of poor neighbourhoods by liberal, arty, middle-class types. The best part of the screenplay is how the writers connect the history of racism in Chicago and by extension the US into the Candyman folklore; Candyman isn’t just one man, he’s every black person who was lynched, beaten, tortured, whether that be by a plantation owner or a police officer. This should have been where the film ended (with some much needed poignancy) but the screenwriters instead ruin what little they had in the way of sorrow and tragedy. I mean, Reminiscence (2021) also had some decent lines, but if you don’t back it up with an enjoyable storyline, you don’t really have a watchable film.

The final act is where Candyman begins to unravel. After the moving narrative of “everyone in the hood who is a victim of racist brutality is Candyman”, Peele and co. lose the plot, quite literally. Trying to tie-in the 1992 film (especially the baby character) with the latest sequel, not to mention the abandonment of race and racism (with a black character William maiming our protagonist and forcing out a further iteration of Candyman), like housing projects and gentrified neighborhoods, everything that’s built is eventually destroyed. In addition, the rules are abandoned. If you say his name (please get that shit song out of my head) Candyman kills you, regardless of who you are, but in the finale, he spares the person summoning him which makes no sense at all. The final line “Tell Everyone” is also nonsensical, because the only thing viewers will be telling anyone about is how disappointing this film is, not how racism is a prevalent and never-ending problem that needs to be tackled.

The worst thing any horror film can do is fail to scare you. With the inclusion of comedy, irritating characters like Brianna’s brother Troy, making the audience apathetic about prejudice, the overall tone of this flick is wrong, kinda like its 2020 marketing. While not as terrible as Antebellum (2020) or as laughable as Black Christmas (2019), a film that’s more focussed on delivering a message and generating income for a movie franchise at the expense of narrative, ambiance, and emotion will always be a let down. You can piss off all the white people you want, you can make as much profit for Hollywood as you like, but a fright-free horror film is like a sweet without sugar, it’s pointless.