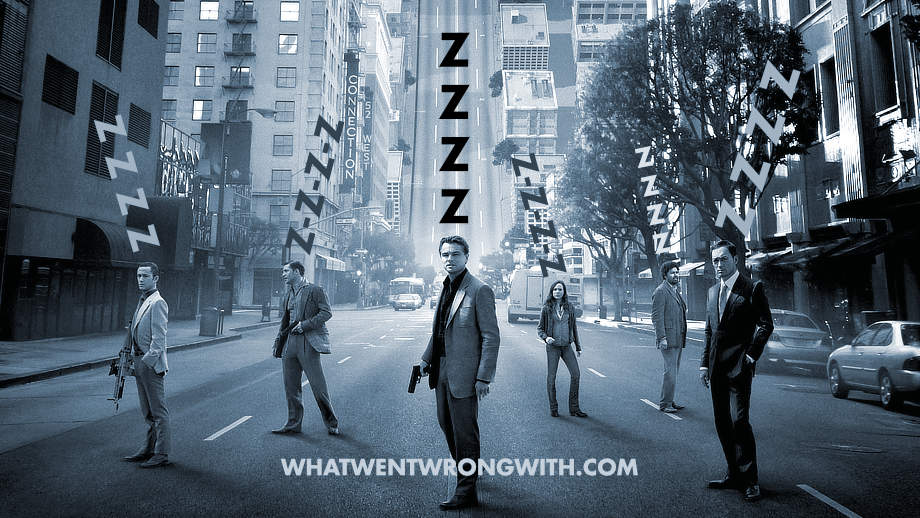 Inception is one of the most overrated films of all time, not just in the sci-fi and action genres, but all genres. After making a handful of memorable films (and a couple of classics) this is where Christopher Nolan’s filmography began to dip in quality just as the world began to shower him with undeserved praise. This film has amassed millions of adoring, doormat fans (which includes critics) some of whom claim Inception is the height of elaborate, complicated storytelling. Inception is not a “bad” film per se but it’s a mediocre movie disguised in visual effects and camouflaged with the pretence of narrative complexity. Nolanites ignore the fact that Tarsem Singh’s The Cell, Paul Verhoeven’s Total Recall, Victor Fleming’s Wizard Of Oz, even Wes Craven’s Nightmare On Elm Street did a better job of depicting the subconscious. And films such as the Wachowski’s The Matrix and David Cronenberg’s eXistenz conveyed, both stylistically and tonally, thought-based illusions in a superior way over a decade prior to this picture’s release. All of these films were better in terms of concept and delivery, not to mention originality, and all of them were more interesting to watch.

Inception, in case you don’t know, is about “extraction”; stealing information from people’s subconscious whilst they sleep 😃 …namely corporate secrets from CEOs 😴. Aside from the planting of an idea in someone’s mind (known as “inception” in the film) much of the first act could be achieved with simple computer hacking or old-school safe-cracking. The characters instead go to great technological and medical lengths and travel the world for a bit of corporate espionage, but unlike the low-budget film Cypher, the execution here is overblown rather than subtle. To put it simply: this is Paycheck meets James Bond meets Vanilla Sky: dull, jet-setting suits amidst mediocre action. There’s parts of the film including the lead character abseiling in a black suit and a snowmobile/ski-based shoot-out which makes me think Christopher Nolan was channelling James Cameron making True Lies (at least in his dreams). Either that or he fell asleep one night penning the script with the Cadbury’s Milk Tray Man playing on his cathode-ray telly. According to the character Arthur; “true inspiration is impossible” but most film fans can see which (better) films led to this one.

The main problem with this film is the dull depiction of dreams. Leonardo DiCaprio’s character Dominick Cobb confirms what we all experience: “Dreams feel real while we are in them, it’s only when we wake up that we realise something was strange”. This idea should have been applied to the entire movie. Regardless of how “real” the architecture and environment needs to be in order for the target to believe their surroundings, there should have been some kind of subtle difference between each layer of dream and reality. Nolan could have hired multiple Art Directors/Directors Of Photography for each of the three dreams, thus making each one look slightly different than the one above but no, Inception is just more of Christopher’s bland, sterile, suited worlds where everything is neat and clinical; furnished by Habitat and clothed by Moss Bross. Once again the abstraction of time takes precedent over cinematography originality (which ironically, this film won an Oscar for). Wally Pfister very much like Christopher Nolan, seems to get undeserved recognition for being rather conventional (until he made the terrible Transcendence of course).

After the intriguing concept of moulding someone’s thoughts, Cobb and his group concoct a massive plan that involves impersonations, long-haul flights, and sedatives but the planting of the said idea, in the end, amounts to showing someone a photo, handing them a nostalgic item from their youth, and telling them a lie. Since “inception” is the central part of the plot, this conclusion is so underwhelming, that I suspect the expensive sets and explosions are there to distract more than impress.

Whilst on the subject of expensive set-pieces and mental trauma, since a train was Cobb’s chosen method of exiting his subconscious (and which worked) why does that object in particular force its way into the dream world? Surely his reoccurring nightmare would involve tall buildings or window ledges since that’s the real-life location of his wife’s demise?

What cannot be ignored is how drab the entire film looks given that it centres around dreams. Christopher Nolan must have some lacklustre fantasies… living in a period house and a swanky flat… oh my, how unlike real life! As I’ve said before, I recognise that the reconstruction of “reality” is key here since the mark has to believe their environment but once things start to go tits-up (getting shot at or chased) you might as well defy the laws of gravity and physics. Maybe start to fly or magically transform your vehicle from van to helicopter, anything is possible since it’s all the mind right? Instead of a fun, imaginative thrill-ride, we instead have very constrained realities which for me is indicative of how boring and lacking in imagination Nolan is; Inception is basically The Cell: The Corporate Years.

On a side note, there’s a scene in which the group hi-jack a taxi (in the first level dream) kicking out what looks like a white man (actor and location manager Russ Fega) but when they enter the cab, there’s (what sounds like) Middle Eastern music playing. So either white people’s minds are heaving with stereotypes or the casting department are so racist that they’d rather whitewash a minor role than give it to an actual actor of Arabic descent. Add this to the stereotypical south Asian doctor, and the fact that Cobb’s wife Mal isn’t as mentally strong as her husband, we can say that the low-key bigotry of Interstellar is present here too. I can hear fans argue that there’s no prejudice because of the inclusion of Ellen Page’s strong female character. I disagree. Ariadne is a tomboy-ish nerd rather than a cocktail dress-wearing woman capable of bearing children. Nolan is suggesting here that intelligence comes at a cost; if you have looks you’re fragile and need a man to lead you, if you’re mentally “equal” with a man, you’ll have male physical traits. Think I’m talking shite? Well, it’s no more absurd than the fan theories about this flick (more on that later).

Much earlier in this film’s life, Inception was apparently an 80-page treatment for a horror film. The projections (the mind’s representations of real-life people) of Cobb’s wife and his children (whose faces are always turned away from the camera) are therefore, I assume, intended to look a little eerie. The scene in the elevator where Mal suddenly looks at Dom’s associate Ariadne accompanied by a clamouring sound, is an example of this genre bleed-through but these scenes are more amateurish than nightmarish. In some ways we should be thankful that Inception isn’t a horror film; Nolan directing that genre would be umpteen times worse than his foray into science fiction action.

Marion Cotillard who plays Mal Cobb, was an odd choice to cast in a film where Edith Piaf’s song “Non, Je Ne Regrette Rien” heavily features, given her portrayal of Piaf in 2007’s La Vie En Rose. Every time that song played, it made me inwardly laugh, and if I was one for exaggerated facial expressions, I’d have been rolling my eyes prior to every “kick”. Whilst on the topic of casting and unintended reactions, maybe Christopher Nolan should have chosen a Japanese actor whose English is a little more decipherable. Even though he’s suave and sophisticated, hearing Ken Watanabe mumbling through half of the film just added to the general annoyance I felt throughout the screening.

Judging by what was written and said (at the time of its release and today) the overreaction by fans and critics still continues; this is a blockbuster that’s disguised in “cleverness” with streaming and broadcast blurbs using terms like “mind bending” to describe it. I’d like someone to tell me what’s so intelligent and inventive about it all. A dream within a dream, the incorporation of stimuli into the dream environment, none of it is mind-blowing since we all experience these things almost every day. I’ve read a very tenuous argument saying Inception is a metaphor for film-making itself. This kind of inflated and pretentious interpretation is exactly the kind of thing I despise about Nolan’s fandom. As they sit there with a poster of the Penrose Stairs on their wall, masturbating onto a Rolex Chronometer and overthinking shit, they fail to acknowledge the possibility that there is no hidden meaning, that Nolan has never and will never make a 2001: A Space Odyssey in his life time, in fact he’s more likely to make something akin to Guy Ritchie’s Revolver. The deathbed-in-a-safe scene may have been constructed to look like the bedroom at the end of 2001 but that’s as close as Nolan will ever get.

The funny thing is, this was a perfect film for subliminal messaging given the definition of “inception” in the screenplay. Had Chris been more talented, he could have planted in the viewer the idea that this is the best sci-fi movie of all time. Actually, the way it’s been overrated, maybe he did.

Regardless of what most people think, Inception isn’t original, it didn’t thrill me, and it didn’t move me. Given its plot, this movie says nothing about our lives being a dream, it never delves into the (consistent) effects of DMT and the possibilities of our reality being a simulation, game, or sleep-based fantasy. As a big-budget summer blockbuster, Inception plays it too safe; it could have been pro-suicide but it remains firmly grounded in mainstream reality and orthodox beliefs. Even though it wishes it was, this isn’t The Truman Show or The Matrix, Inception doesn’t challenge what we think and know, it instead contains very common ideas filmed in an extremely familiar way. The somewhat ambiguous ending doesn’t make the movie any better or worse since what precedes it fails to question our existence. The fact that the chess totem goes unused, who gives a fuck about the spinning top (a spinning top that two people knew about which surely defeats its purpose)?

Some fans will say that like Interstellar, the setting here is irrelevant; this film is in fact about regret and family and how guilt will affect you long term and take over your subconscious. That may be the case, but the crossover of chosen genre and overall meaning has to coherently gel together. A TV show like The Sopranos managed to portray the subconscious in a much more poetic way, and in my opinion, that’s probably where Christopher Nolan got the idea to abruptly cut to black.

The online rumour or fanboy-theory that Nolan’s upcoming (yet perpetually delayed) Tenet is a sequel or set in the same universe as Inception (in an M. Night Shyamalan Unbreakable/Split kind of way) means Christopher’s next movie may also be an overrated disappointment. If Tenet isn’t a filmic palindrome which can be watched forwards and backwards, it too would fail its own chosen concept.

Inception is the very definition of an average film; the entire cast’s acting, Christopher Nolan’s writing and directing, and Hans Zimmer’s score, all of it is heaving with mediocrity. Were it not for the huge budget, the story, performances, camera work, and sound would be clearly seen as unexceptional and unremarkable. Visually and narratively, Inception is a shit David Fincher meets a crap David Cronenberg, in fact either of these directors could make a better film in their sleep.