Priti Patel is the latest in a long line of sellout minorities in politics. Being Britain’s first female, B.A.M.E. (Black, Asian, And Minority Ethnic) Cabinet Minister could have been a noteworthy moment for our country. Unfortunately, Patel once told BBC Radio Kent not to label her “BME” as it was “patronising”. This was an acceptable stance to take were it not for her extensive history of self-hatred and selling out. To get the minor things out of the way first; Patel married Alex Sawyer, a white marketing consultant for the NASDAQ stock exchange (possibly to breed-out her own race), she voted against the 2013 Bill which introduced same-sex marriage in England and Wales (probably to uphold the white, heterosexual status quo), and she is also a self-confessed “Thatcherite” (which I always think is a subtle way of saying “I’m a twat”).

Patel is regularly given the role of spokesperson when there’s any issue (minor or major) regarding race or racism. She was for example, wheeled-out to defend Boris Johnson on Sky News when rapper Dave called him a “real racist” on The Brits.

"Well that's utter nonsense." Home Sec @Patel4Witham says @BorisJohnson is "not a racist at all", after rapper Dav… twitter.com/i/web/status/1…

Apparently it’s “utter nonsense” to call Johnson a “racist” despite his well-documented racism including describing Muslim women as looking like “bank robbers” and “letterboxes” as well as his “satirical” writings in which he referred to Africans as “flag-waving piccaninnies” and Ugandans as “Aids-ridden choristers”.

Winston Churchill’s racism against ethnic minorities is also well documented; and it ranges from referring to the Sudanese as “savages”, Palestinians as “barbaric”, Kenyans as “blackamoors”, to having a hand in the 1943 Bengal famine in which he refused to send food supplies to the region saying it was their own fault for “breeding like rabbits”. He also said “I hate Indians. They are a beastly people with a beastly religion.” and it’s this man’s graffiti-ed statue who Priti Patel was so outraged over, calling the protestors who annotated his white supremacist effigy “hooligans”. Given that her own parents were from Uganda by way of India, this kind of stance was ironic to say the least. I assume she’s been watching the revisionist film The Darkest Hour rather than reading history books. 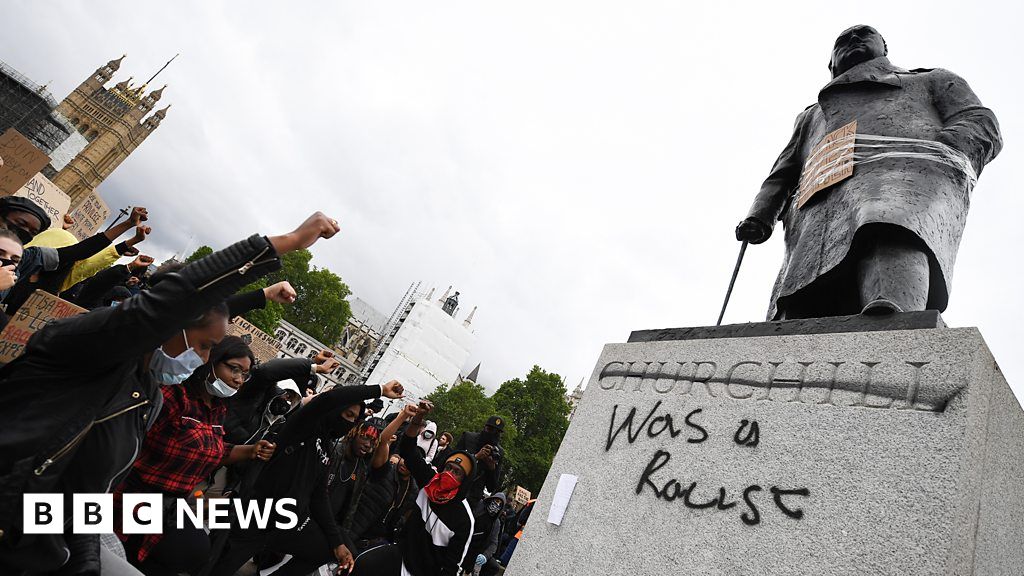 The fact that Priti also defended slave trader Edward Colston saying it’s “utterly disgraceful” that his statue was toppled, we can deduce by her recent opinions that she prays at the edifice of British Imperialism and Colonialism. How can these entirely appropriate actions “undermine” anti-racist protests? A slave trader’s statue is torn down after worldwide outrage over yet another case of racist Police brutality? Surely that’s the most apt time and occasion to deface a statue commemorating a white racist?

Along with fellow-sellout and sentient brown snooker ball Sajid Javid, Priti Patel has also backed immigration laws that would have barred her own “unskilled” parents from entering the UK which in turn would have prevented Priti from ascending to position of Home Secretary and enacting those very laws. Prejudiced paradoxes aside, Priti has now gained a full hat-trick at the Black & Brown Sell-Out Championships. In case you’re not aware; Patel aside from pretending to be white is a wannabe Zionist too. Once a vice-chair of Conservative Friends Of Israel, she also pissed around in apartheid Israel having secret meetings and suggesting that the UK government give “aid” to their army (I assume so they can Krav Maga a Palestinian kid or occupy some more stolen land).

I acknowledge that ethnic minorities shouldn’t all think and act the same way but to defend every law and opinion against your own demographic is the very definition of a self-hating sellout, in fact her continued, unwavering support for the white establishment gives the likes of Judge Jeanine and Michelle Malkin a run for their collective blood money.

Priti is basically the UK’s Sarah Palin; a politician that’s slightly attractive on the outside but rancid on the inside. She’s every right-winger’s wet dream and every racist’s favourite guilty fap. I’ve seen Daily Mail runt Andrew Pierce fawning over her on Sky News’ Press Preview show and I have no doubt that other, straighter yet similarly odious, right-leaning pricks are wanking over her speeches and jizzing on her Twitter timeline.