What Went Wrong With… Apple TV+?

Apple TV+ has a 7 day free trial and unfortunately for Apple, you can watch their entire catalogue during that time. You may think I’m exaggerating but no, if you binge-watch, you can literally view every single Apple Original programme in that time frame because the service only has ten series and two films to its name!

As soon as you log in and start your subscription, you find yourself at the “Watch Now” section. Here’s a screenshot… 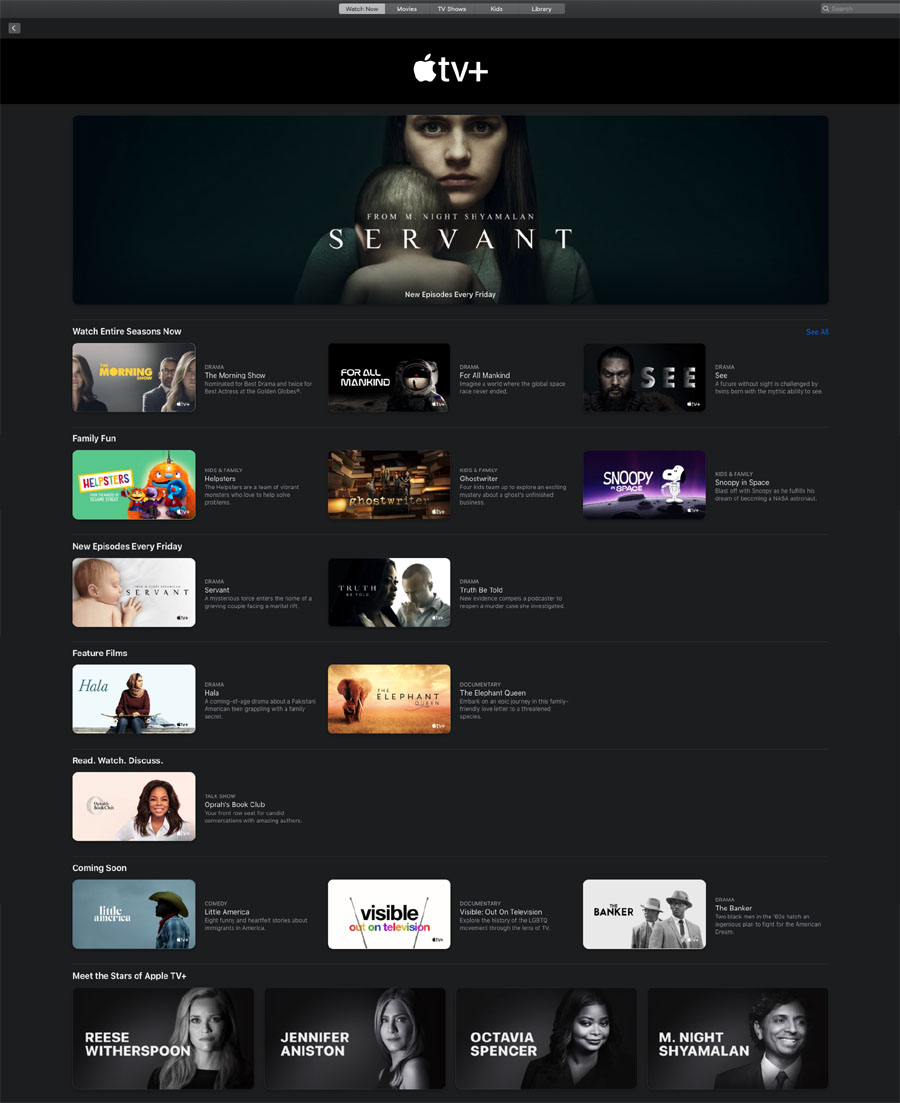 …under this tab is everything that Apple TV+ has to offer. Alphabetically, there’s Dickinson, For All Mankind, Ghostwriter, Helpsters, The Morning Show, Oprah’s Book Club, See, Snoopy In Space, Servant, Truth Be Told and let’s not forget The Elephant Queen and Hala under the film section… wow, what an amazing selection… not! After watching the first episode of each TV show, the only one that intrigued me was Servant. All the rest were dull with an air of pompousness. Sure, Apple was always a pretentious brand but their original programming is on a whole other level; it’s like BBC Four, PBS, and HBO fucked each other and produced a shit streaming service.

Servant is undoubtedly Apple TV Plus’ best show but it too has its problems. After being reeled-in by the Insidious-esque title font and a theme tune which sounds like Phoenix Nights played by Joseph Bishara, the first episode is somewhat creepy and slightly captivating. That being said, even this flagship show declines in quality after the M. Night Shyamalan-directed first episode and somewhere around the seventh or eighth episode, you begin to doubt that there’s going to be a definitive and satisfying finale. It feels like the writers haven’t figured out an ending (Lost cough, cough) and with potentially 60 episodes in total, I doubt that there’ll be a conclusive reason as to how the doll becomes a baby, why Sean has lost his ability to taste food and drink, and what connection splinters have to Leanne the nanny or Jericho the latex doll. Once the nanny’s uncle pops-up and everyone tries to prevent Leanne from going away with him (despite previously trying their hardest to get her out of their life) you start to lose interest in the plot which seems to be up in the air, very much like the success of the streaming service this show appears on.

Depending on your Mac’s Appearance settings, the grey-and-dark or bright-grey-but-still-depressing Apple TV+ interface isn’t at all alluring to a potential subscriber. The overall aesthetic may be simple but searching for things to watch is somewhat confusing especially when you’re trying to find original Apple TV content rather than paid-for content by other companies. The Apple Originals are not exactly highlighted in the results; yes, there’s a teeny, tiny Apple TV+ logo in the bottom right-hand corner of the tiles but this means more often than not, you’ll click something only to be told to pay £2.49 for it. At least Amazon’s Prime Video has a noticeable Prime ribbon over the top corner of their poster thumbnails to denote it’s “included with Prime” or Netflix where everything is already included in the monthly subscription. The fact that there’s not that much to watch coupled with the fact that the app contains other “channels”, the “Movies” and “TV Shows” tabs are almost useless unless you subscribe to other services. The way this app is constructed, it looks as though it’s geared toward the viewer spending money renting or buying movies and television shows rather than focusing on Apple Original content which is self-destructive in my opinion. The fact that product placement is rife, with FaceTime and iPad Pros appearing in most of their shows, it feels like entertainment is on the back-burner while Apple tries to sell more of their overpriced products to you. And with the recent Catalina upgrade almost turning my Macbook into a useless brick, I doubt I’ll be spending more cash on their stylish-yet-extortionate aluminium tech regardless of how much “fun” the characters in these Apple Originals seem to be having.

Apparently, Apple is spending billions of dollars in order to compete with all the other streaming services but this hasn’t translated to memorable or even watchable entertainment from the viewer’s perspective. The lack of content would be fine if this were a case of quality rather than quantity but Apple TV+ isn’t either. You could argue that the service will get better in the future with more content to come but a “Damien Chazelle drama series”, a “Simon Kinberg/David Weil science fiction series”, and two shit shows courtesy of everyone’s favourite anti-Michael-Jackson-propaganda-creator Oprah Winfrey isn’t setting the world alight. With an “Oprah Winfrey sexual assault docuseries” and an “Oprah Winfrey/Prince Harry mental health docuseries” in the works, it’s quite clear that Apple Original content is veering toward dreary indoctrination-al shite made by overpaid sellouts. To balance out this televisual misery, thankfully there’s Steven Spielberg’s Amazing Stories and Time Bandits to come but aren’t we all growing weary of remakes and reboots? The irony is, the original versions of these two programmes (which will undoubtedly be superior) will probably appear in the Apple TV+ app if you search for them and buying the originals will be a better prospect than watching the remakes.

This declining company entices you in with a “7 day free trial” but once you’ve entered your credit card details, you’re then told you have to “cancel a day before to avoid being charged”! Not only is their “offer” paltry and a bit of a sham, £4.99 per month for 12 lacklustre, upper-middle-class shite programmes is not a good deal.

Even on the first day of my trial I realised there was nothing on this streaming service that would appeal to me. Whether it was a drama, thriller, or comedy, all of it seemed like poncey, semi-educational crap that your bookish mum and dad would approve of. Sure, Apple has hired some decent talent but everything they’ve created is slick yet mundane which seems to be the company’s unwritten motto ever since Tim Cook took over. Apple TV+ may possibly be the company’s latest Macintosh TV: a badly thought-out, almost pointless product that nobody wants; a failure created without the input of Steve Jobs. Even with a couple of days left of my free trial, I’ve cancelled my subscription (which by the way, wasn’t an easy process).

Apple TV+ doesn’t contain a “Breaking Bad” or “Stranger Things”, there’s no classics here. Everything on this platform is oddly bland. It may appeal to the type of people who wear blazers to school or suits to work but to everyone else, this kind of pretentious programming is extremely off-putting. If we were still in the ’90s, this would be the kind of programming your dull-arsed English teacher would show you after dragging the school’s bulky, cathode-ray TV out of the AV Room; a kind of substandard-BFI-slash-Curzon without any of the memorable content. Another thing I noticed is that all Apple Original shows start with a wannabe-Netflix opening-slash-intro sound which reminds me of the first note from Vangelis’ Chariots Of Fire theme. This is quite apt since that film was also a boring and overrated creation that only the dreariest upper-middle and upper-class twats wanted to watch.