Remember that one-shit wonder by Nizlopi called “JCB”? It was the most embarrassingly mediocre songs from the mid-noughties (which is saying something given the level of shite released at that time). The track was wannabe sentimental and wannabe emotional, but the lyrics were country-bumpkin-basic and extremely cringe-inducing. With arse-clenching lines like “my dad’s probably had a bloody hard day” and “the engine rattles my bum like berserk”, the song was an example of middle-class mundanity: people whose lives are so dull and uneventful that they create soulless and awkwardly amateur art. Coupled with the fact that the lyrics seemed to have been composed by a 30 year-old with an 8 year-old’s mind (rhyming “B.A. Baracus” with “Bruce Lee’s nunchuckas”) Nizlopi were the crappiest musicians from 2004 (and among singers such as Natasha Bedingfield and Nelly, that took some doing). Now imagine if Nizlopi’s career took off and they released more and more middle-of-the-road albums containing more JCB-esque songs; you’d be screaming “aargh my ears” every time the radio was switched on. Now picture if you will, that Nizlopi isn’t a group but instead a weird-looking, self-obsessed, ginger wanker clutching an acoustic guitar: wouldn’t that be a nightmare of epic proportions? Well that nightmare has somehow materialised and the “JCB Song” incarnate is Ed Sheeran, writer of insipid Folk-Pop that’s been clogging-up the airwaves for almost a decade.

Actually, Ed Sheeran worked as Nizlopi’s guitar technician so there’s a direct influence between them. In fact “Castle On The Hill” is essentially “JCB Song” meets “7 Years” by Lucas Graham (what a dreadful combination). Sheeran has stated that his influences also include Eminem and Elton John but he has yet to steal any of their shitty music. There have of course, been a few occasions when Ed has been accused of copying music, allegedly plagiarising everyone from TLC, Marvin Gaye to wait for it… Matt frigging Cardle. I personally, can hear Tracy Chapman’s “Mountains O’ Things” in “Shape Of You” but that’s not exactly plagiarism, it’s just very similar. Sheeran must be up all night listening to better musicians trying to emulate their talent (except for Cardle of course). With Quincey Jones fan-boying in a recent interview, and the story about the time Sheeran slept at Jamie Foxx‘s house whilst he was “up and coming”, it’s very peculiar how many celebrities (particularly music-based celebrities) praise this plonker. It’s also extremely strange when you see the public acting like this squished conker-looking motherfucker is the next Paul Simon or John Lennon. Just because you’re holding a guitar, have a few tattoos, and look like you haven’t washed in three months, doesn’t make your poppy pish any more credible (just look at Post Malone). It’s not like his vocals make up for his looks; Sheeran sounds like an East Anglian Justin Timberlake, his voice is effeminate but not angelic, it’s mundane rather than melodic so why all the praise and fame?

Ed Sheeran’s lyrics are also mediocre at best. Take his song “The A-Team” – it’s touted as one of his greatest but I cannot for the love of me hear what’s so special about it. “The A Team” is no “The Corner, The Streets”, it’s no “House Of The Rising Sun”, it isn’t even an “Another Day In Paradise” and yet it’s overrated by many a critic and fan. There’s cringey drug-pun elements such as the title and chorus (“She’s in the Class A Team” – please no) and there’s also a nonsensical simile complete with a forced rhyme (“But lately her face seems, slowly sinking, wasting, crumbling like pastries” – what’s she got: Psoriasis or Ichthyosis?). With all these problems, I find it odd that this song is so acclaimed. It won a frigging Ivor Novello award for god sake! But why?

And what about “Galway Girl”, one of Ed Sheeran’s most annoyingly popular tracks? It contains simple yet appalling rhyming, there’s parts where Sheeran goes completely off beat, and there’s an atrocious Hip-Pop delivery over a Backstreet Boys-cum-N’Sync beat. The end result sounds like someone auditioning for The X-Factor. I assume Ed thought juxtaposing Irish culture with Hip-Hop was original – I bet Rob Kelly is shaking in his fucking boots.

MC Sheeran’s collaboration with Eminem and 50 Cent resulted in one of the corniest shitfests in modern times. The three of them sounded like the opening act in a Dad-Rap convention.

Ed also contributed to Slim Shady’s Revival which was one of the worst releases of his career. The pair looked pleased as punch that the album sold well rather than sounded good, and that in a nutshell, is how music has devolved since the turn of the millennium: sales equals success and nobody in the industry cares when something sucks balls. 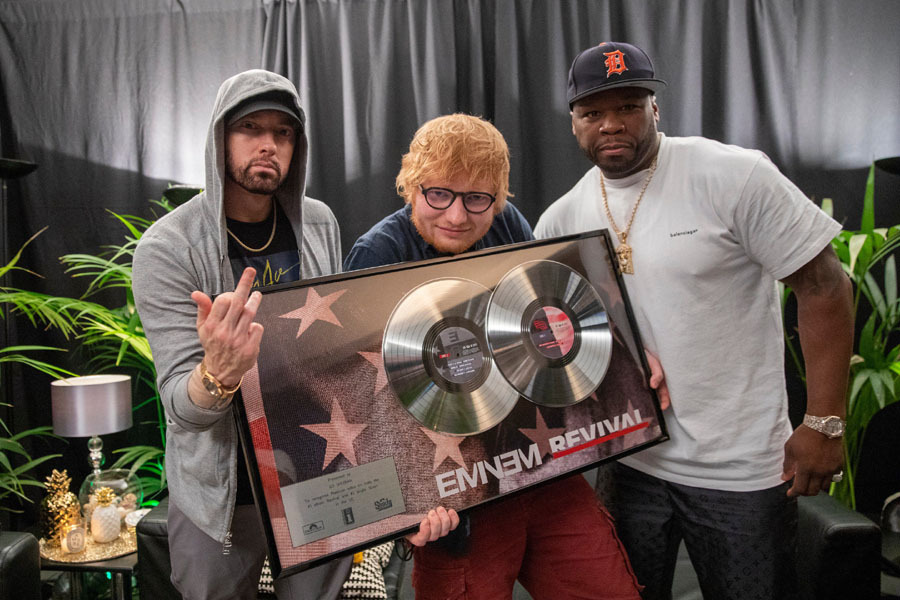 Ed “The Bod” Sheeran has posed topless a few times in an attempt to showcase (I assume) his tattoos and not his pasty, unsculpted body. I wonder if he thinks he’s a sex symbol? I mean he looks like Jim from Rosie And Jim. I doubt that someone’s frigging themselves to one of his pics. 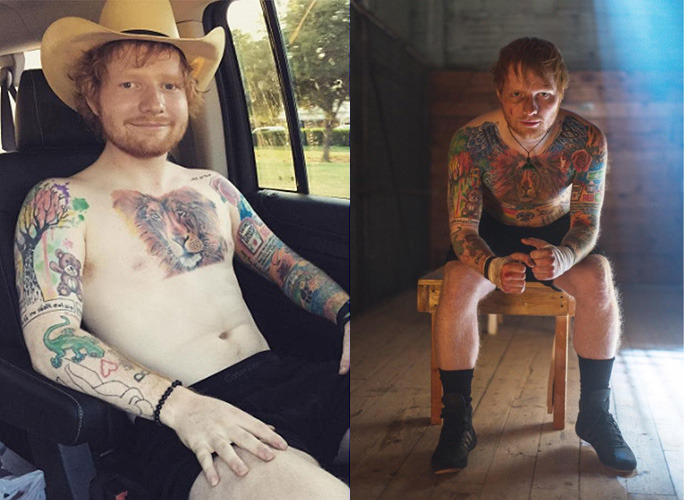 Every time I say something disparaging about the man, I’m reminded that Sheeran famously quit Twitter after “trolls” bothered his delicate sensibilities. It’s odd that someone who puts their voice, face, and body out for everybody to consume doesn’t want any feedback. Looking and sounding like Newton Faulkner anally-raped David Gray, this weak, flavouless, diseased Jim Henson puppet who makes bland, anodyne songs for middle-class morons, apparently can’t take criticism.

When talking about his musical credibility, people usually point to Stormzy as an example of his Hip-Hop-slash-Grime credentials (as though making songs with a black musician is supposed to give someone automatic credibility, you racist). I couldn’t give a fick-fick-fuck if he’s made music with Wiley and Devlin or that he knows Big Narstie, his music is akin to the liquid dripping from the bottom of a garbage bag: I don’t care which ingredients went into making it, or that it’s been hanging around in the streets, all I know is that the shit reeks.

The worst thing about Ed Sheeran is his ever-increasing popularity which means his songs are played everywhere; on every radio station, every music video channel, from BBC Radio 1, 2, to Capital, from MTV Hits to The Box. It’s playing in adverts, in grocery stores, in lifts, is there anywhere you can go to escape the torture? You can’t even go to the cinema without seeing his ugly mug. I watched Yesterday recently and I was bewildered by the decision to use Sheeran as the successor to The Beatles. And remember when he stared and laughed oddly in Game Of Thrones? The man cannot act. Even when he’s playing himself (Yesterday and Bridget Jones’s Baby) he still manages to ruin the scene he’s in, if not the entire film.

If I hate him and his music so much, why haven’t I reviewed any of his albums you may ask? Well there was never any point since all of Ed’s LPs have amidst the overrating, received negative reviews. In 2011 his debut album + (Plus) received 4/10 from NME. Then in 2014 his follow-up album x (Multiply) received 3/5 from Time Out. In 2017 ÷ (Divide) got 2.8/10 from Pitchfork and in 2019 No. 6 Collaborations Project got 2.5/5 from HipHopDX. All of these bad reviews haven’t made a blind bit of difference and Sheeran’s career has gone from strength to strength. His albums don’t just go platinum, they go diamond which once again proves that sales and popularity doesn’t equate to talent. If a celebrity appears in Forbes or The Sunday Times‘ Rich List, they’re usually the worst in their chosen artistic field. Making his way through a calculator as he chooses his album titles, it seems that Minus or Negative is missing from his discography which is odd given that his entire back-catalogue is short of talent, lacking in originality, and something that should be rejected.

It’s so strange that this MBE-receiving, Ivor Novello, Grammy, and Brit-winning tit makes dreadful Hip-Hop and horrendous R&B (tinged with Folk elements for some fake substance). If Dad Rock is a thing, Ed Sheeran’s music is Mum-Pop; inoffensive, insipid dross that parents can safely listen to with their 8 year old daughters on the school run.

I mentioned Nizlopi becoming world-famous in the opening paragraph but a much scarier prospect and more accurate analogy is James Blunt somehow making it to mega-star status. If that happened you’d be dumbfounded and yet that’s exactly how I feel every time I see or hear this sentient Madball.

I bet if I turn on the radio now, this hobo with a microphone will pop-up at some point in the next fifteen minutes… yep, I was right, I switched to Radio 1 and now I have to listen to the incessant clamouring of “Beautiful People”. It’s strange that Sheeran wrote “Beautiful People”, a song about image-obssessed celebrities. Even if Marjan Pejoski designed his clothes and the ghost of Kevyn Aucoin did his make-up, Ed would still look like a homeless hobgoblin. It’s not like his mouth opens and lets out a harmonious voice to compensate for his outer appearance, Sheeran’s vocals mirror his looks; mundane and off-putting. Mr. Ed has so little star quality that I’m certain people are pinching themselves every time they catch a glimpse of his smug face. This frog-eyed gargoyle who has a beard that looks like Danny Bonaduce’s pubes and tattoos that resemble a sailor’s corpse, needs to revisit Halifax or Framlingham or Riddleton End or Crapston Villas or wherever the fuck he’s from and work out why his surroundings created such an irritating, overrated, cock-eyed cunt.