What Went Wrong With… The Conjuring Universe?

Ed and Lorraine Warren were real-life paranormal investigators and their most famous cases gave birth to The Conjuring franchise, a series of horror films which began with James Wan’s The Conjuring. The first film in the series was hugely satisfying; it was written by people who were interested in the subject (Chad and Carey Hayes), the Warrens were played by likeable actors (Vera Farmiga and Patrick Wilson), the supernatural antagonist was convincingly played by Joseph Bishara, and it featured a slow build-up of tension and scares thanks to Wan’s masterful direction. The most important aspect of this movie however, was that it stayed close to the real-life story of Ed and Lorraine who at one point investigated the Perron family’s haunted property as depicted in The Conjuring. After this film’s success, the inevitable sequels began rolling out. Given the tone of the first movie in the series, I expected the rest to be in the same vein. Unfortunately, this was not the case.

Ed and Lorraine’s most notable cases were the Amityville house, the Enfield poltergeist, the Snedeker house, and the Annabelle doll. Once The Conjuring film was made, I like many other fans assumed the sequels would simply go through each of these investigations with the same feel and as much substance as the original but that didn’t happen. The Conjuring franchise quickly became a Fast And The Furious-style profit-making machine without any regard to what made the first film special. Annabelle was the second film in this franchise and the first to disappoint. By enlisting a director who was responsible for Mortal Kombat: Annihilation and Butterfly Effect 2 (John R. Leonetti), this flick immediately became a shitty, schlock-fest that abandoned realism and atmosphere. It was inferior to The Conjuring in every way and yet it became hugely profitable. This then set a precedent for more lacklustre movies which were less “Wan” and more “Leonetti”. 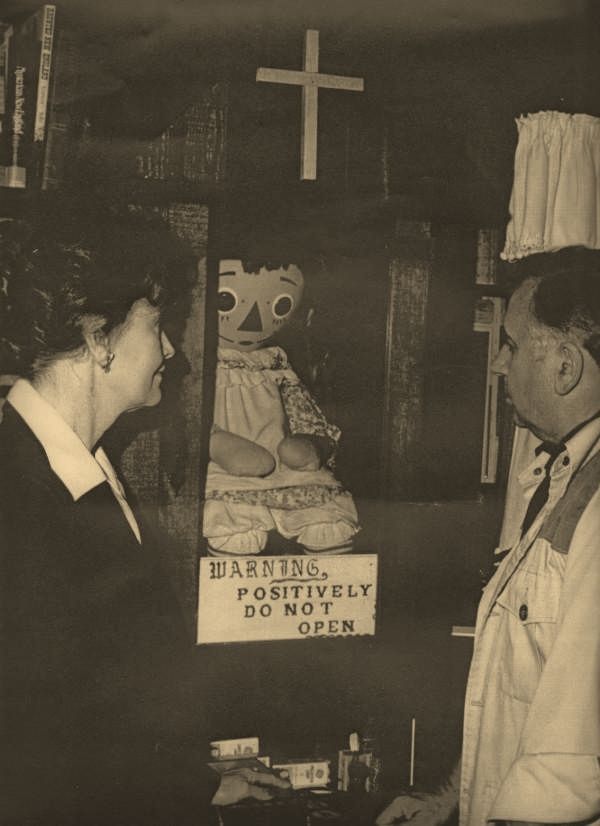 Lorraine and Ed Warren and the real Annabelle doll

With Annabelle, the film-makers forgot the real-life origins of the franchise, they disregarded the fact that this series was built upon actual people and events: the Warrens and what they investigated. Sure, you can use some artistic licence but as soon as they decided to depict the Raggedy Ann doll as a scary-faced, porcelain doll with a convoluted backstory, you knew the direction this franchise was going to take. With a completely fictitious plot involving cult members and disabled orphans, the origin story of Annabelle is now a make-believe sham. Wan who cemented himself as a horror movie maestro after bringing us back-to-back brilliance with Insidious and The Conjuring also began to stretch the actual plot into Hollywood implausibility with rotating crucifixes and the inclusion of unrelated characters such as “Valak The Nun” and “The Crooked Man” in his sequel The Conjuring 2. These additional elements began to move the franchise away from the Warrens and more toward fabricated spin-offs.

I’ll point out that there was no haunted samurai suit or a haunted board game (Feeley Meeley) at the Warrens’ museum. The haunted television which was shown in Annabelle Comes Home is a mirror in real life and The Ferryman is an unrelated myth. La Llorona (The Weeping Woman) is a Mexican folk tale, The Crooked Man is an English nursery rhyme, and god only knows where The Nun originates, it looked like she was made up by an unimaginative exec just to elongate the franchise so Warner Bros. could generate as much money as possible. Sky’s The Enfield Haunting was a better and more faithful telling of events which puts this franchise into perspective. When a TV mini-series is better than a Hollywood movie, something’s gone completely wrong.

Warner is churning out more movies from this deteriorating series. The director who f’d-up La Llorona (Michael Chaves) is directing The Conjuring 3 and there’s also a sequel to The Nun in the works, the worst film in the entire series. These godawful movies are now known as “The Conjuring Universe” as though the franchise is some kind of cheap, comic-book-style trash. Actually, that’s apt since anything that followed The Conjuring has been B-movie garbage that has gotten progressively worse with each installment. Ooh look Father Perez from Annabelle is in The Curse Of La Llorona, it must be connected, and ooh look it’s Taissa Farmiga, the sister of Vera Farmiga in The Nun, it must be nepotism.

The Annabelle doll has featured in three films so far with increasingly daft titles. You half-expect there to be follow-ups such as Annabelle Goes To School and Annabelle Goes To Jail like an Ernest P. Worrell-esque, straight-to-video shit-fest. James Wan meanwhile, is ruining Aquaman which is kind of ironic. Like the DC Extended Universe, the Conjuring Universe is also in a mad-dash to whip out as many iterations of as many characters as possible, content in making forgettable shite as long as they generate profits for some suits rather than please cinema-goers.

Ed Warren died in 2006, 7 years before The Conjuring was made. His wife and paranormal partner Lorraine Warren passed away in 2019 (as the credit stated in Annabelle Comes Home) which means she witnessed her own legacy being dragged through the quagmire of Hollywood bullshit just so some sellouts could make money off of her and her husband’s life. Isn’t it great that New Line Cinema, The Safran Company, and James Wan are raping life to produce substandard art? If they want to sell their souls that’s fine but don’t try and sell someone else’s. What’s ironic is that these money-hungry, tinsel-town tits have created films so lifeless and so spiritless that they would be expelled from The Warrens’ Occult Museum. The Warrens are probably turning in their graves right now and Warner Bros. are probably translating that idea into a movie too.