What Went Wrong With… Madame X by Madonna?

“Madame X” is an alter-ego of Madonna and the name of her latest album. In a similar way to Nicki Minaj’s “Roman”, Beyonce’s “Sasha Fierce” and Canibus’ “Rip The Jacker”, this is an artist who realises they’ve been making banal music and so reinvents themselves with a different persona and a pseudonym. Madonna described her character in an Instagram and YouTube video. She said…

“Madame X is a secret agent. Travelling around the world. Changing identities. Fighting for freedom. Bringing light to dark places. She is a dancer. A professor. A head of state. A housekeeper. An equestrian. A prisoner. A student. A mother. A child. A teacher. A nun. A singer. A saint. A whore. A spy in the house of love. I am Madame X.”

…This is one of the corniest paragraphs I’ve ever read, and judging by this description, Madame X seems to be everything Madonna wishes she was but doesn’t have the guts or the constitution to be. Madonna was once a child, she became a dancer, she travelled the world, she promoted herself as a saintly whore, but then she became a mother, got old, pumped her face and arse with god-knows what, and became one of the lamest artists in entertainment. Now she wishes she could turn back the time. In her lead single “Medellín” she sings “I took a pill and had a dream, I went back to my 17th year” but this is just a dream. Madonna can no longer claw back what she lost over the years. The amount of atrocious music that Madge has made since the late-1990s, it’s almost impossible to recapture her heyday since she’s so far removed, both musically and physically, from what made her likeable back in the 1980s.

I suppose it’s a good thing that “Madame X” is “fighting for freedom” ’cause the real-life Madonna sure isn’t. Aside from performing (badly) at the Apartheid Eurovision Song Contest in Israel recently, she also made her Aretha Franklin eulogy at the VMAs all about her and even hijacked the Women’s March. Her ego really is inflated these days, kinda like her pudgy butt.

Madame X is in some ways a follow-on from all these moronic antics. The album is essentially a wannabe meaningful, wannabe artistic, wannabe cool, wannabe counter culture LP (like the musical equivalent of Russell Brand) and like Russell Brand, the amount of political platitudes here make you wanna puke: “stand tall” and “things have got to change” (from “Batuka”) and “wake up” (from the anti-gun “God Control”) are just some of them. There’s the song “Killers Who Are Partying” in which she says “I will be gay, if the gay are burned, I’ll be Africa, if Africa is shut down, I will be poor, if the poor are humiliated, And I’ll be a child, if the children are exploited”. The song is intended to be about empathy but this lyrical structure of “I will be X if X is Y” makes no sense since in most cases X has been Y’d up the wazoo. Given the entire song and world history, it sounds as though Madonna is saying she’s literally a gay, poor, African, Islamic, Israeli, Native American female child (note there’s no mention of Palestine… cough… cough).

Whilst on the topic of political nonsense, there’s also a song called “Extreme Occident” which opens: “I went to the far right, then I went to the far left, I tried to recover my centre of gravity”. The chorus is like a shit riddle written by someone holding a rhyming dictionary: “I guess I’m lost, I had to pay the cost, The thing that hurt me most, Was that I wasn’t lost”

There’s also a Joan Of Arc-ish track called “Dark Ballet” in which she sings “They are so naive, They think we are not aware of their crimes, We know, but we are just not ready to act, The storm isn’t in the air, it’s inside of us”. The song is so confused that toward the end she inadvertently plugs a lame clothing brand: “Can’t you hear outside of your Supreme hoodie, the wind that’s beginning to howl?”. I guess she’s still a “Material Girl” at heart.

Singing in English, Spanish, and Portuguese, the album is like a musical about a Marxist revolutionary written by a champagne socialist. Madonna is someone who wants to ride the wave of political extremism and social justice but her lyrics are so hollow that they come across like Emma Thompson at a climate protest; contradictory and ultimately pointless. 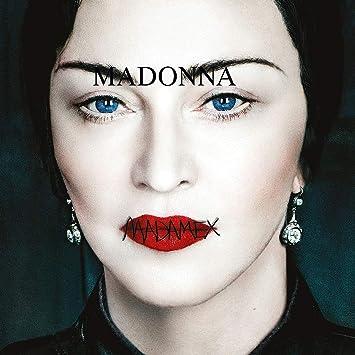 Aside from the SJW-sentiments, on the album cover, the album title is written over her lips which adds to Madonna’s political pretence. The artwork shows her mouth sewn-up as though she’s some kind of free speech hero but when has Maddie said anything controversial or meaningful? (although in “God Control” she does sing like her lips have been sewn together). With her name written across her unibrow, the album cover also makes her look like a crap Frida Kahlo. I suppose trying to look like a Mexican artist is all part and parcel of the triviality and cultural appropriating of Madame X.

Like “La Isla Bonita” before it, this is another occasion in which Madonna forgets she’s Italian for a fleeting moment and begins using Latin sounds and Latino visual aesthetics to try to detract from her waning talent. Unfortunately, most of Madame X sounds like a Jennifer Lopez tribute act channelling M.I.A. but failing at both. The Latino and World elements are so dire that you’d expect either Pitbull or Sean Paul to be on here. Surrounded by Yes-men for the last 30 years, this is the kind of album a famous singer makes when nobody around them has the guts to say “Madge love, that’s a load of crap”.

So are there any positives here? Well, “Crazy” and “Come Alive” are either the filler or the section in which Madonna doesn’t try so hard to be cool and therefore is the least offensive to the ears. “I Rise” is catchy enough, it would have been fine if she’d made it 10 or 15 years ago but in 2019 this also sounds stale. Something Madonna seems to be oblivious to; is the fact that sounds and visuals change with the time and if you misjudge a style or miss the cultural zeitgeist, you look and sound unoriginal or overdone. For instance, the “one, two, Cha, Cha, Cha” in “Medellín” probably appeals to dreary Strictly fans these days rather than fans of 1950s Cuba.

Madame X is most definitely made by someone (or some people) who are out of touch with society; they’re trying to be relevant but enlisting Swae Lee and Quavo isn’t how you do it, unless of course you want to be in the same league as the lame Ellie Goulding and Liam Payne.

The production on Madame X isn’t much better than the lyricism. There’s a choir in “God Control” but this is no “Like A Prayer”. The song switches mid-way to a Disco beat along with awful ’80s pop-rapping! “Future” sports some shite, reggae-esque production along with autotuned vocals and “Faz Gostoso” sounds like a Eurovision song circa 2005 (nil points). In “I Don’t Search I Find”, Madonna finds some old House organ and string sounds and a time-worn House beat and yet ironically, one of her lines in this track is “I found something new”. The piano in “Dark Ballet” is the best part of the song (if not the entire album) but it suddenly turns into a vocoded, kid’s TV show-esque, circus-sounding mess. The line “The storm is inside of us, I want to tell you about love and loneliness” is similar to one of Kanye West‘s incoherent, madman ramblings and along with Madonna blowing into the microphone, this song sounds like she’s having a nervous breakdown.

Madame X has no real structure, there’s no flow from beginning to end, it’s just a collection of meaningless songs placed in random order, and since there’s no standout tracks, it’s also too long. It’s not only her lips and buttocks that are packed with filler, this LP has numerous songs that are far from memorable and are just present to extend the running time. No wonder companies are in a rush to make us stream rather than buy music. With trash albums like this, I bet purchasing has dropped considerably.

Every time Madonna opens her mouth, I’m reminded of her corny Hip-Pop grillz and the time she called her son “my nigga”. Madonna is basically another white artist from Interscope that the world is supposed to be in awe of but really shouldn’t. Without the backing of a multi-billion dollar company, these artists’ facade would fall, and as a blend of Eminem and Billie Eilish (wannabe controversial and faux-alternative) Madonna is yesterday’s great white hype with an inflated sense of worth that thankfully, many people are beginning to see past. It has been reported that the accompanying Madame X Tour has been under-performing or under-selling so maybe the public aren’t as daft as I thought. Although I’m sure Madonna’s fanboys and fangirls will overrate this album (and the tour) like all her trash they’ve previously over-praised.

Madonna keeps projecting all the things she fantasises of being; she told us that she’s a “rebel” (at least in her heart) and now she’s a “freedom fighter” but only on wax. But look how greatly the real-life identity of Madonna differs from her musical persona. In reality she’s just a mediocre, self-obsessed, has-been who doesn’t have the cojones to be what she imagines in the studio.