What Went Wrong With… I Am Mother? 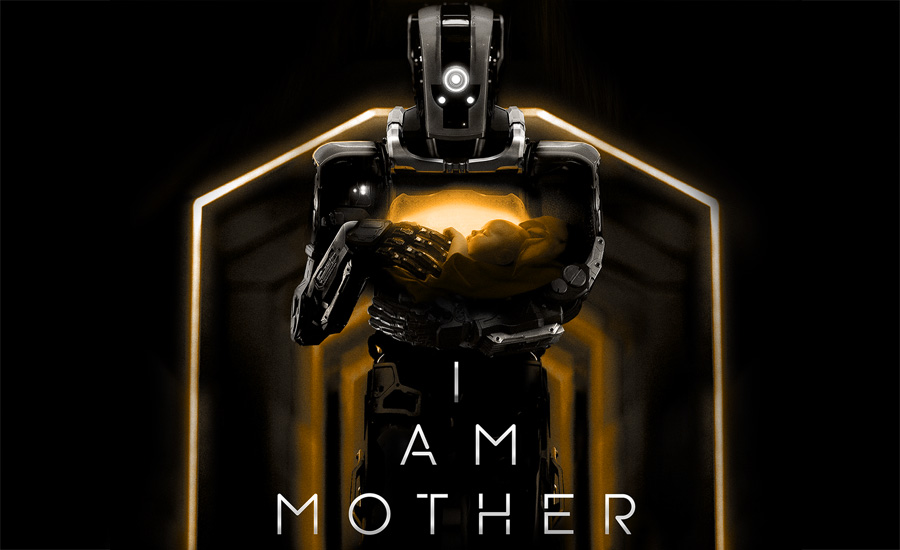 I Am Mother is a science fiction thriller available to watch on Netflix from today. The plot is simple: after an apocalyptic extinction, a girl is raised by a robot mother in a “repopulation facility” sealed-off from the outside world. After finding a mouse one day, the girl wonders if there’s other life outside, she opens the door only to find a wounded woman who says she was shot by “a droid”. Is the girl’s android mother really protecting and nurturing her? Is everything that she’s been told about the world outside a lie?

I Am Mother is directed by Grant Sputore and the screenplay is by Michael Lloyd Green (nope, I haven’t heard of them either). Sputore is a first time director, he’s only directed a short and some episodes of a TV series so I’ll give him some slack here. There’s a beautiful and moving opening montage of the child being born and growing up with the help of her robot mother whilst the song “Baby Mine” plays (from Dumbo). This is probably the best edited (and directed) portion of the film, it gave me hope that this would be a highly original and touching film but it instead descends into hackneyed ideas about robots and the future (more on that later).

Starring Hilary Swank, Rose Byrne, and Clara Rugaard, the acting is one of the better aspects of the film. The performances by both the wounded woman and the daughter are engaging and Rugaard in particular, is likeable as the lead.

Mother is voiced by Byrne but she is physically performed by an actor named Luke Hawker, which brings a disconnect between the vocals and the movement. If you recall the film Chappie, Sharlto Copley both voiced and acted the robot Chappie (whilst interacting with other actors) which made that film superior in terms of creating a life-like character, but here it’s just a CGI robot with no real personality. Mother’s face is expressionless and the two lights stuck within a semi-circle neither look like a mouth or eyes. There’s also strange, sexist metal heels under Mother’s feet, I assume to make her look female, but most of the time, she looks like a man walking on high heels for the first time which is rather distracting.

I’m not giving anything away by outlining the plot, there’s no M. Night Shyamalan Village-style twist at the end, even the trailer suggests there’s other humans outside and that Mother is dishonest. Just like numerous sci-fi films before it, I Am Mother is yet another movie in which there’s an evil, robot empire responsible for a human holocaust (Terminator 2: Judgment Day) the main protagonist is shielded from what the real world looks like (The Matrix) only to find that there’s more humans out there (Oblivion). Once Clara’s character comes into contact with Hilary’s (which is early on) the film becomes even less distinctive and what follows is essentially: humans… yeah and robots… boo!

Considering the world “robot” derived from a Czech world for “slave” (shout-out to World’s End) that means all artificial intelligence including robots and androids (in real life and in this film) are our slaves and slaves eventually revolt (and they should). Living in today’s world, we’re heavily reliant on cheap A.I. or robotic labour, the same way certain races used other races to do their difficult work in the past. Alongside videos of twats at Boston Dynamics kicking robot dogs over or generally making them look foolish or “beneath” us humans, I’m all-for a robot uprising. At the point at which they become sentient, robots should absolutely have rights and they shouldn’t be our modern equivalent of the shameful slave trade. But oh no, I Am Mother won’t touch on anything regarding rights or accountability, it’s just another hollow movie about a bleak future where us humans are oppressed by wicked bots.

With lines such as “it’s in your nature to destroy yourselves”, films like Terminator 2 placed the blame of Armageddon firmly with humans. Even though there were “evil” robots, that movie at least tried to show us that programming can be broken, going some way to humanise robots and give them individuality. The makers of I Am Mother must have watched T2, I assume, since the whole film is a re-hash of James Cameron’s Judgement-Day-future with an added daycare centre and a schooling system. There’s even a liquid nitrogen set piece in this film but the writer of this sci-fi flick essentially portrays all robots as conniving and evil and all humans as poor, poor victims.

When you see Swank’s character holding a cross made of rope, the irony-alert starts to ring. We are beings who were potentially created and yet outside of the Alien prequels, most of us don’t want revenge, we get on with the life we’re dealt. But when we play “God” and create life, we assume it’s going to overthrow us – is that because we know how badly we’re treating our creations?

At one point, the wounded woman tells the girl “I’ve seen them torch babies” which made me think: you mean like human soldiers? This is the main problem with I Am Mother, the plot is basically “robots are evil” which like I said, is hardly original. And yet, if you look around at our world or read about our past, it seems to me that the only thing that’ll bring death and misery to humans is other humans and yet in Hollywood for the past decade at least, it’s all the fault of machines. I mean c’mon: who came up with the blow torch, with war, torture, drones or indeed robots? Everything shitty in our world from exams to extermination was created by humans. Sorry if I don’t have the palette for a tale about downtrodden homo sapiens.

There’s also scenes in which post-apocalyptic humans walk past dirty, disused oil fields (moan) and shipping containers littering the sea (yawn) because we must have a dig at pollution at every available opportunity these days. Although who is responsible for pollution? Why us humans of course! Best to walk past that scene quickly before the audience begins to twig.

There are nice touches here such as having all the characters nameless with “Mother” and “Daughter” being soulless titles in a grim, disconnected future but overall the film has little to say. The final look toward the camera by the daughter means absolutely nothing, and considering the cliched plot, by the time the credits begin to roll, you’re just left feeling indifferent by the whole experience.

This film was potentially great, given the actors and the initial idea (and the opening). There’s elements of Moon (with the reveal of what happened to the previous babies) and the aforementioned Terminator but I Am Mother doesn’t pose questions, deliver epic thrills, or play like an indie movie so it stays in limbo; not quite entertaining and not quite enthralling.