What Went Wrong With… Jeremy Vine (On Channel 5)? 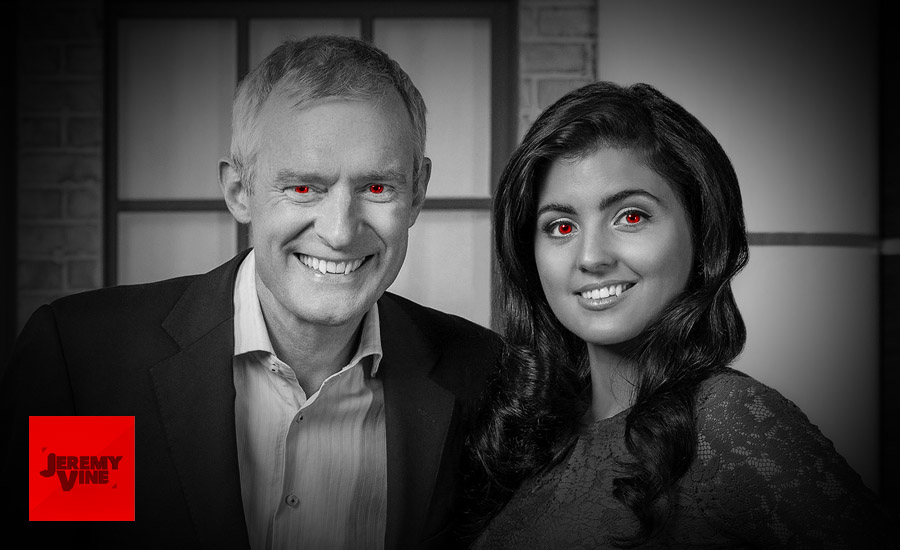 After dishing out morning-time-misery for a whopping 18 years, Matthew Wright left Channel 5’s The Wright Stuff and his chat show was then handed over to BBC Radio 2 killjoy Jeremy Vine. Even though the presenter of this programme changed last year, you can hardly tell the difference however, as the set, the theme tune, and the entire concept of the show is indistinguishable from its predecessor; there’s a panel consisting of three vanilla twats who look like they’ve been statically charged and pushed through Marks & Spencers, there’s a minuscule audience of what looks like Daily Mail readers packed into a broom closet, and there’s inane multiple choice questions every ad break. Sound familiar?

Even ex-”Babe In The Booth” co-host Storm (whose parents must have been fans of The X-Men, The Australian Gladiators, or Scottish weather) is part of this “new” show and she seems to be there to fulfill an outdated and sexist concept of including an attractive female sidekick to attract a wider audience (think a magician’s assistant). Actually, Jeremy Vine with his drab-casual suit jacket usually looks like a Tory vampire and alongside Storm Huntley with her raven black hair, the pair look like they’re taking part in a daytime production of Bram Stoker’s Dracula, sucking the life out of the viewer as they watch. Speaking of old horrors, given the time of day in which this show airs, there’s of course advertisements for life insurance, equity release, funeral plans, and, err… bingo and roulette. The show’s target audience I assume, are out of work gammon, brain-dead retirees, and right-wing gambling agoraphobics (and possibly arrogant “bloggers” taking the piss).

This programme is billed as Channel 5’s “flagship show”, and with a schedule jam-packed with monarchs, bailiffs, and dobbers, I guess this is the best the channel has to offer. To get a glimpse at what the Jeremy Vine show is like, just follow their Instagram account (yes, they actually have one, although God only knows what for). On their Insta, you can see dreary images such as this…

That was a lively start to the week! #jeremyvine

…wow, how entrancing! If Channel 5 hired Jeremy earlier, they could have created a Vine account too. They missed a trick there.

If you’re hankering to see a review of the day’s newspapers but aren’t satisfied with an entire morning of it courtesy of the BBC, ITV, and Sky News’ breakfast shows, then tune into Jeremy Vine for more. You could also tune in to watch the amazingly heated debate… not! There isn’t even a chilly debate, in fact the tepid atmosphere of non-stop agreement is infuriating, the trio have notes, but fuck knows why. This bland-on-bland panel-action features the likes of mundane mainstream leftist Owen Jones, mediocre mainstream rightist Carole Malone, and the scrawny, lanky, lad-magazine-editing-yet-anti-porn, right-wing wank-stain Martin Daubney. There’s also Dr. David Bull (what an apt surname) who looks like a GP from an alternate dimension where the NHS is run by failed male models and middle-aged rent boys.

If you want to watch a pointless non-discussion of topics such as “No Kids At Weddings?” or “Bed Wars: Which Side are You On?” then watch the show. You can then check the handy little clock on the bottom left of the screen to count the hours of your life you’ve just wasted. And if you watch Jeremy Vine on 5, wait an hour or so, and then tune into Radio 2, you can receive a double dose of plebeian pish per day for all you masochists out there. Just make sure there’s no razor blades or sleeping pills near you. Although if you’re paying attention to the adverts, you could insure your life and plan your funeral before you end it all.