What Went Wrong With… Scorpion by Drake? 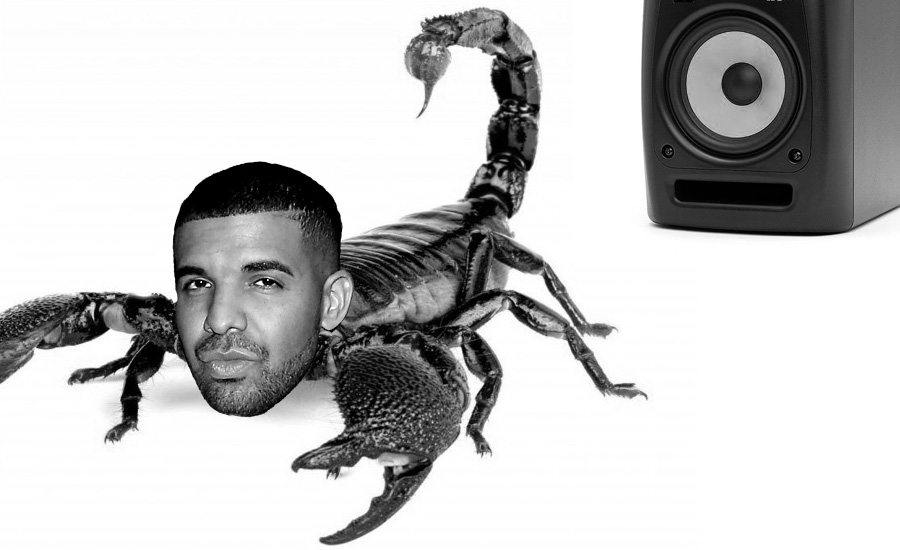 The overexposed yet mediocre rapper-slash-singer known as Drake releases his fifth studio album today and it’s titled Scorpion. With Drake’s old-man dad-dancing you first think to yourself, is this title referring to the pluralised 1980’s Rock group or is it referring to Drake himself, you know, a poisonous prick? Whatever the meaning, I have to say that I’ve never seen the appeal of Drake and with this whopping 1 hour 29 minute-long double album, surely even his fans feel like they’re overdosing on this autotuned crooner? Sitting there listening to Drake’s nasally, Weezy-lite vocals is a struggle even for a short period but with Scorpion it feels like you’re being sonically tortured (Canadian military take note). With the songs on this LP varying very little, this album is like listening to one shite song on repeat – each side seriously sounds like one long-arsed track – there’s nothing that separates either topic, content, or flow, especially on the second half.

Now I’ve never been fond of double albums even when I’m a fan of the artist, they always feel like the musician should have edited down the tracklist but because they’re so self-absorbed they release everything they’ve made. Being surrounded by Yes-men, these out-of-touch singers think everything they record is worthy of adoration but the truth is the exact opposite. Gargantuan albums sometimes however, are supposed to be two-sided because of an appropriate concept and with Scorpion, Drake was supposed to have created a double album that contained a “Rap-side” and an “R’N’B-side”. But, from what I can tell he has abandoned that plan and made two Hip-Pop sides (or alternatively a crap-side and a shit-side).

Listening to the so-called “Rap-side” of Scorpion, you hear way too much R’N’B and you think to yourself how much more R’N’B can you get? Well, when you find out, you actually wish you could go back, for what follows is a tortuous trail through mediocrity. Once you get to the second portion of the LP, what you’re confronted with is actually offensive to label as “R’N’B”, it’s more like relaxed, bubblegum, teeny-bopper Pop. Sure, some of the songs try to sound like credible Rhythm And Blues (“Finesse” for example trying to imitate UK singer Jones) but this isn’t credible R’N’B by any stretch of the imagination, this is pure autotuned garbage. By the time you get to the corny-as-fuck “Ratchet Happy Birthday” with Drake yelling “brrrrrrr… it’s your fucking birthday!” not only do you cringe, you feel like ending your subscription to Spotify (other streaming services are available). Seriously, it’s an understatement to call some of these songs amateur, most if not all of side two is an embarrassment.

There’s lacklustre production on almost all of the songs in Scorpion, the majority of which feature the most basic drum patterns programmed into a DAW by a lazy, deaf producer. The rapping (or singing) isn’t any better, there’s average flow and delivery on all songs. I don’t know if Drake used a ghostwriter but if he did, he needs to get a refund. Some of the song credits do show several names per track but God only knows what they were contributing. What the hell would this album have sounded like without all this help?

Rapping about all the shit he owns, how great he is, peppered here and there with hollow emotions isn’t the making of a rap genius. And listening to that monotone, pinched voice for 25 tracks is like being repeatedly stung by a scorpion (hey, maybe that’s what the title means).

The first side of Scorpion is tolerable in retrospect, but only after hearing the dreaded “R’N’B” side”. Strangely the only decent song on the entire album is the opener “Survival” although as Drake keeps pointing out “this is just an intro” thus making you ignore the only listenable track. The first side of Scorpion is heaving with Pop-Trap, just take a listen to the understated and shit “Nonstop” or “God’s Plan”, “Mob Ties”, and “Talk Up” each containing a wannable-Trap delivery. Alongside all this Trappy-trash, there’s also some awful singing here and there, in “Elevate” and “God’s Plan” for instance, both songs sound like a smoker with an electrolarynx wandered into the vocal booth. Coupled with the the two or three-note amateurish melody of “Mob Ties”, the first half of Scorpion is unsatisfactory for anyone who isn’t a Drake fanatic.

The second side of the album begins with yet more basic drum patterns (electronic bass followed by electronic claps) and surprise, surprise, there’s more autotuned vocals making for yet more typically characterless muzak by Drizzy. This then becomes much worse with “Summer Games”, which contains a 1980’s-sounding synth behind more lame singing; the line “breaking, breaking, break, break, break, break, breaking my heart” sounding like his copy of Logic Pro just crashed. Along with Drake going off-beat in “Jaded”, the second side is pure mellow-pop trash. Even the late, great Michael Jackson can’t help Scorpion from being an overly long, banal release.

In the song “Is There More” Drake raps “I would rather lose a leg than lose their respect” (in reference to other OVO artists) but since his respect is so low, especially with the public, I guess he better get that Gigli saw out. Deep down even Drake knows how lame his music is and in an ironic admittance of his wackness, his own so-called “editor’s note” for this album reads:

The first three statements here are true, the rest is just a has-been rapper trying to be clever and brush-off his criticism. “Drake took an L” and “I like Drake’s older stuff” is put there to distract his naysayers and make it seem like he once had credibility but everybody knows that Drake has never been anywhere near credible. His old releases are just as trash as this album, the only saving grace of his old shit is the fact that it used to be a lot shorter.