Mark Wahlberg is definitely up there when it comes to being the worst actor of all time. For some unknown reason this cretin was overrated by the media for his work in films like Boogie Nights and his career as an actor flourished despite him having all the talent of an under-cooked bowl of Boston Baked Beans. Watch any movie that Wahlberg appears in and you’ll bear witness to lots of same-same acting; same demeanour, same gait, and same expressions – from Martin Scorsese’s The Departed to Michael Bay‘s Transformers – the accent might change a little, but Mark Wahlberg is constantly and consistently bad.

Mark’s acting varies between two settings; angry and happy. On screen he’s either a mean and constipated Mark Wahlberg (Shooter) or a soft-spoken and soft-stooled Mark Wahlberg (Date Night). To portray a more gentler, funnier, average guy, he routinely puts on a higher-pitched voice and even begins to enunciate his words to play a non-threatening or educated man (see M. Night Shyamalan‘s The Happening for proof). This amazing, jaw-dropping range is so narrow however, that you couldn’t even slide a single page of the script between it, and his two awe-inspiring levels (smiley or mean) is all Mark Wahlberg has in his toolbox of acting tricks.

If you want to witness this hack in action, watch one of his “softer” characters such as his role in Lovely Bones where he was completely and utterly unable to portray a mourning father whose daughter had been kidnapped or murdered. Even when the character isn’t supposed to display complex emotions such as simultaneously showing sorrow, anxiety, and panic, Wahlberg is still cardboardy and flat, and apart from smiling or scowling his performances are indistinguishable. His performance in Contraband for instance is almost identical to his performance in Max Payne, Wahlberg’s limited acting is so tedious that there is no visible difference between his portrayal of a Detective in The Other Guys or him acting dead at the end of Ted 2.

Outside of Hollywood, Mark Wahlberg was once known as Marky Mark and his foray into Hip-Hop during the 90s was also embarrassingly bad, possibly worse than his acting. For those of you who are too young to remember, Marky Mark was a lame, cheap, Vanilla-Ice-eque Hip-Pop creation. If you want to know what a bonafide wigger looks like, just type “Marky Mark” into Google and check out the images. This prat was the biggest wigger in Hip-Hop, seeing his videos and photo-shoots today make Riff Raff look positively Nubian.

But bad acting and corny music is the last thing I should be criticising him for, especially when Mark Wahlberg has something much more abhorrent in his past. Back when he was 15 years old, he was involved in two separate incidents where he harassed African-American children, threw rocks at them, and also shouted racial epithets including “Kill the nigger!”. Then a year later when he was 16, Wahlberg beat a middle-aged Vietnamese man unconscious using a piece of wood whilst calling him a “Vietnam fucking shit!”. Later he attacked a second Vietnamese man who he punched in the face. When he was arrested it has been reported that he used racial slurs such as “gooks” and “slant-eyed gooks” to describe his victim.

Then, in 2014 Mark Wahlberg filed an application for a full and unconditional pardon from these convictions. It was pretty astounding that someone the age of Mark “Patriots Day” Wahlberg didn’t know that this application would cause an uproar and ultimately be unsuccessful. This application for a pardon was preposterous since he wasn’t wrongly convicted, not to mention he was guilty not of a petty crime but of numerous serious and racially motivated acts of violence. Wahlberg must have been channelling that scene from Michael Bay‘s Pain And Gain, asking for a second chance from the Judge despite being guilty as sin.

The most obscene and outrageous part of all this is the fact that this violent racist who hung around with a gang and who openly hated minorities was then allowed to make his way into the world of Hip-Hop music, not making some weirdly pro-white version of the genre but instead attempting to act black. Like a precursor to Eminem, Marky Mark was a one-time racist who then became a wannabe minority, I guess nobody saw the irony of someone hating black people whilst wishing he was black himself.

After pratting around being a Rapper he then became a model for Calvin Klein, this six-packed shit-bag then strangely attracted black entrepreneurs who wanted to market their product to a bigger section of society – namely white people. But it’s one thing to broaden your fan-base by advertising your product using models from different backgrounds, it’s another thing entirely to drape your “urban” clobber over a hate-filled hoodlum. And that brings me neatly to Cross Colors, a sell-out brand who couldn’t be bothered to do a little research into what a racist fuck Marky Mark was. This so-called black brand with the slogan “Clothing Without Prejudice” who according to their Wikipedia page “denounced gangs and called for racial unity” via their political and social slogans, saw fit to send some of their clothes to an ex-gang member and purveyor of racial hatred – now if that’s not selling out I don’t know what is. Their philosophy and slogans were obviously insincere… 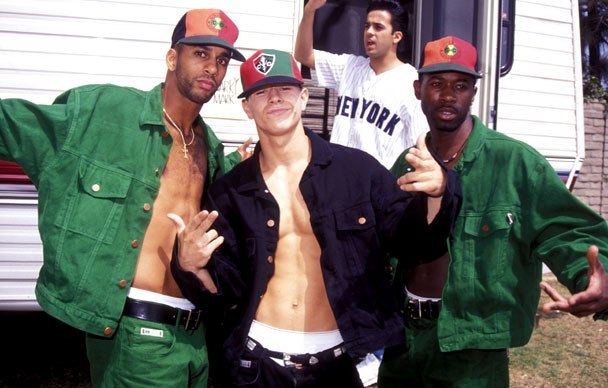 You can catch this fuck-stick posing with some house niggers back in the 90s and to top it off, Cross Colors even let this motherfucker wear a Malcolm X “By Any Means Necessary” shirt – this is not only ironic, it’s in such bad taste that I’m surprised nobody else caught this glaring case of tasteless, vile, and offensive advertising back in the day before it went to print…

Outside of music, this intolerant imbecile was then allowed to make films and inexplicably, various minority directors and actors agreed to work with this dick. One of the most offensive examples of this was Four Brothers where Wahlberg played one of four “brothers” (two white and two black) whose black adoptive mother is killed. As they all embrace each other in a post-9/11 black-and-white-but-no-brown American unity, I myself knowing Wahlberg’s history was appalled by this plot but it seemed that nobody else gave a toss. To me this movie was in very bad taste especially when taking into account that Mark was responsible for beating black people whilst shouting racist slurs at them, but according to Hollywood he was perfectly cast as a so-called “brother” and son of an African-American.

Now it’s one thing to work with someone who’s said racist things (D12 making music with Eminem for instance) but for minorities to work with a racist who’s also committed hate crimes – that to me is the epitome of selling out. So on that note, let’s call out every minority who worked with this racist piece of shit…

Fuck Herb Ritts and Annie Leibovitz for photographing this racist.

Fuck LeBron James for even considering doing a movie with this racist.

I don’t give a shit if he’s dead… Fuck Prince Ital Joe for collaborating with this racist.

And even though I have respect for MC Shan, Danny Glover, Jeffrey Wright, and Denzel Washington, fuck them for working with this prick and not having the backbone to stay away from this racist savage.

And since this isn’t the frigging 80s or 90s any more, surely all white people who disagree with prejudice should also be shunning this admitted and convicted violent racist too?

So fuck everybody that ever associated themselves with this cunt, everybody who laughs and jokes, promotes, writes for, and collaborates with a person who has this type of history is a back-stabber and back-slapper of epic proportions. But especially people of colour in film, television, in fashion, and in the music business – you’re all a bunch of motherfucking sellouts – fuck all of you. And while I’m at it; fuck The Funky Bunch, fuck New Kids On The Block, and fuck everybody in Hollywood – call yourself artistic liberals when you keep giving work to a talentless, prejudiced thug? What a deceitful, double-dealing industry.

Back to Mark “Marky Mark” Wahlberg, this imbecile has lately tried to appease all this wrong doing by appearing in various black-led films. A huge chunk of Wahlberg’s filmography is essentially him declaring;  “look I can’t be racist, I’ve worked with all these black people”. To put icing on the bigoted cake, Wahlberg has also voiced his support of President Obama and he’s even supported same-sex marriages (he wouldn’t want to be accused of being homophobic too now would he?). So I guess that’s that, Mark Wahlberg is definitely not prejudiced any more, and oh look, he’s even active with The Good Shepherd Center For Homeless Women And Children, and I assume he even supports African-American and Vietnamese-American homeless people too. So please ignore all the incidents of hate in his past, because Marky Mark is ever so sorry for those minor transgressions. But you have to ask yourself; is he sorry because he’s overwrought with guilt and realises the error of his ways, or is he sorry because his true opinions and personality would stop him making money in an industry that sells his product to people of colour?

What Went Right With… Nehruvia: My Disregarded Thoughts by Bishop Nehru?