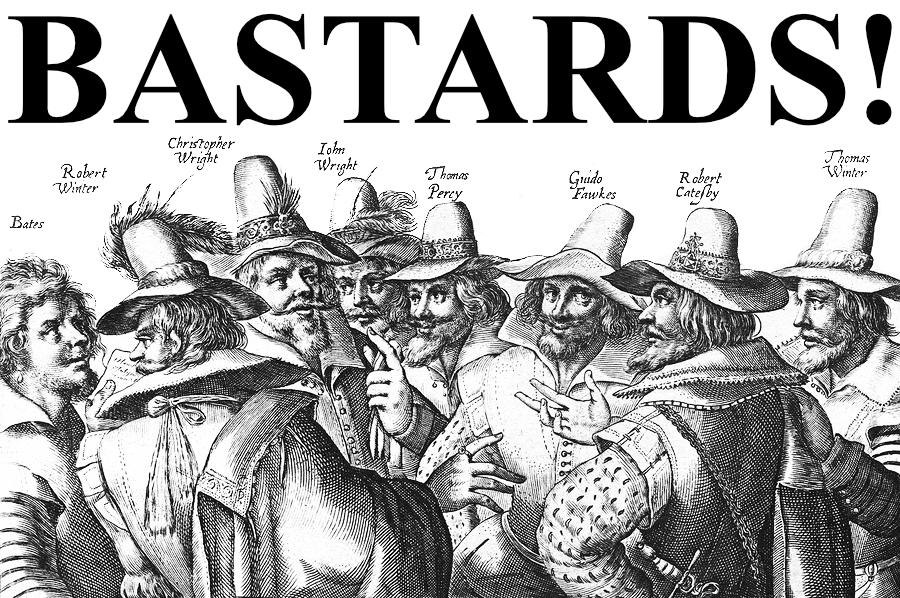 Erecting a huge bonfire and burning an effigy seems so morbid and backward that it’s surprising Guy Fawkes Night (or Bonfire Night as it’s also known) is still celebrated in the 21st Century. I assume that most people are too busy chomping on a toffee apple as they stare at a crappy fireworks show to be concerned with what they’re really commemorating. For those who don’t know, Bonfire Night is the celebration of the torture and eventual death of Guy Fawkes who was the main culprit in the failed assassination attempt of King James VI of Scotland (aka King James I of England And Ireland). Although Fawkes was only one of thirteen conspirators, these days he is the only man the public associate with the failed plot, and despite the assassination attempt being more than four hundred years in the past, individuals, families, and even children still perpetuate this historical Royalist propaganda. On the 5th November 1605, Londoners were first encouraged to celebrate the King escaping assassination by lighting bonfires and an Act Of Parliament designated each 5th November as a day of thanksgiving. This remained compulsory until 1859, but even without an act of parliament in force today, the idiotic masses never miss a chance to commemorate Bonfire Night despite the actual events being so gruesome and barbaric that it boggles the sane mind why an entire nation would still observe such savagery.

Let’s not forget that the questioning of Guy Fawkes was performed under torture and although he “admitted” to the crime whilst under duress, he pleaded Not Guilty during his trial. The main reason torture is an ineffective interrogation method (someone please tell any right-wing twats who disagree) is because a person will admit to pretty much anything just to ease their pain and suffering. But completely ignoring this little titbit of information, the public today assume that everything Fawkes was found guilty of was unequivocal, like there was some sort of irrefutable proof. In Britain over the last fifty years we’ve had the M25 Three, the Bridgewater Four, the Guilford Four, the Birmingham Six, and the Maguire Seven, so why not the House Of Lords Thirteen? Who knows what atrocities took place in order to get their “confessions”, for all we know they were all not guilty.

After their so-called admission of guilt came the so-called trial, but when the case commenced the outcome was never really in doubt, and all of the defendants were found guilty of high treason. And what was their punishment you ask? That each of the plotters would be drawn backwards to their death by horse, their head near the ground. Their genitals would then be cut off and burnt before their eyes, and their bowels and hearts removed. They would then be decapitated, and the dismembered parts of their bodies displayed for the public to see …how completely balanced and rational.

Not that Guy Fawkes was trying to do away with monarchy itself, the group were planning to assassinate King James I so they could restore a Catholic monarch to the throne. But it’s simply moronic for ordinary folk to celebrate the life of a King who once wrote in his book “The True Law Of Free Monarchies” that “kings are higher beings than other men”. Not only did James think the royals were superior to commoners, but he also started witch hunts in England and supervised the torture of women accused of being witches. But, for all his talk of being “higher” and “better” this prick suffered from arthritis, gout, had a stroke, and in the last year of his life he drank heavily and lost his teeth, what great flawless genes he must have had; I bet it was a surprise when he didn’t ascend to fucking heaven.

It’s not like James was the most popular monarch ever, this is proven by the fact that in the first year of his reign there were a couple of other failed assassination attempts too. These two attempts were known as the Bye Plot and the Main Plot, but it wasn’t until The Gunpowder Plot that the masses were whipped-up and transformed into a mindless throng who praised their corrupt leader. I guess all it takes to make the public bow to a dick-tator is a bit of scaremongering, sound familiar? Very similar to 9/11, George Bush, and the Patriot Act, or 7/7, Tony Blair, and the Identity Cards Act; after the Gunpowder Plot, Parliament passed the Popish Recusants Act which required Catholic citizens to take an Oath of Allegiance. The whole “plot” seemed very conspiracy-esque to me, apparently the plotters secured a lease to a crypt beneath the House of Lords, and Fawkes was then placed in charge of the gunpowder they stockpiled there. Then after receiving an “anonymous letter”, the authorities searched Westminster Palace and found Fawkes alone guarding the explosives, how convenient. And whilst on the topic of conspiracies, the Earl Of Salisbury did use the Gunpowder Plot to extract higher subsidies from Parliament, I guess money is always a cause or a by-product of terrorism, assassination, and false-flags.

Imagine if every July 7th British people made four effigies, placed them into wooden tube-like structures and burnt them, or if Americans burnt nineteen effigies every September 11th until the year 2391 and beyond. Actually, this non-event is more like Americans shooting an effigy on March 30th to celebrate the failed assassination attempt of Ronald Reagan. Bonfire Night is such an insane and bizarre ceremony, who knows why as a nation we’re still commemorating the mass-hysteria and bloodlust of a brainwashed society more than 400 years later.