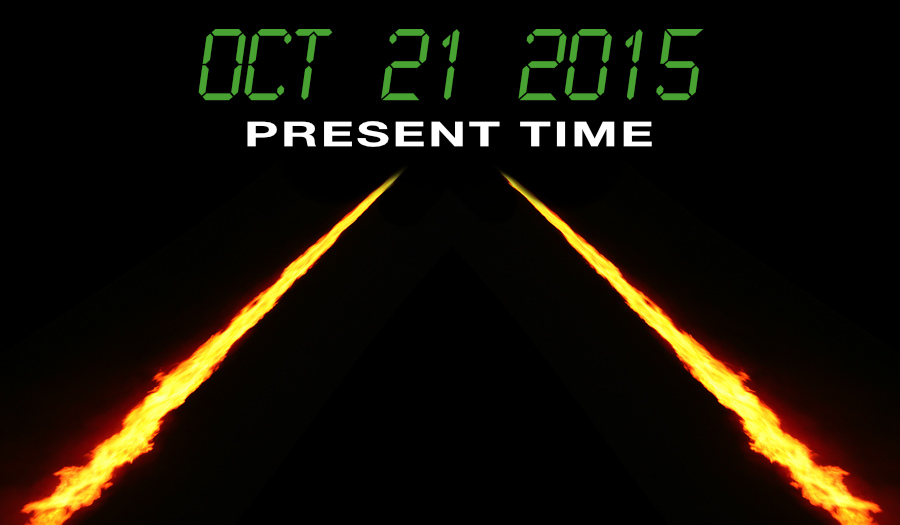 It’s October 21st 2015, the date that Doc Brown, Marty McFly, and Jennifer Parker travelled to in the the classic time-travelling sequel Back To The Future Part II. But looking around at the real 2015, our present is very different from the predicted; there’s no flying cars, there’s no hover boards, there’s no power laces, there’s no size adjustment on clothing, and there’s no hydrated pizza. We may have Facetime and Skype, we may have wall-mounted flat-screen TV’s, we may even have numerous lame 3D movies and masses of unneeded sequels, but we don’t send or receive faxes, we don’t coo over dust-busters, the weather service isn’t efficient, and they haven’t abolished lawyers. I recall a tour guide at Universal Studios saying that in 2015, the creators of the film will meet to see how close their predicted future is to the actual reality, it’s sad to say but the real October 21st 2015 is nothing like the movie.

The noughties and teenies seemed so far away from the late eighties that some of the technology and aesthetics looked quite believable back then, but when an optimistic future disappears as our present reality dawns, it’s quite disheartening when you take a look around and realise that not much has changed. I mean is today really that different from the late eighties and early nineties? We’ve just been to hell and back with another George Bush, the UK is back with another classist Conservative Government, we’ve had another recession, the Transformers and the Ninja Turtles are still going strong, in fact given the amount of reboots and remakes being released in our cinemas we may as well have stayed in 1989, that way we wouldn’t have to endure the upcoming massacres of “Point Break”, “Big Trouble In Little China”, and “WarGames” (to name but a few). I suppose we should all just be thankful that Robert Zemeckis and Bob Gale are preventing Back To The Future from being remade and destroyed.

Back to the film’s forecast of 2015, style-wise nobody’s wearing their pockets inside-out and nobody’s rocking a double-tie, the only thing that’s come close to a correct prediction is the USA Today newspaper that Doc shows Marty. Aside from the headline “Hoverboard Rampage Destroys Courthouse” the paper has a review of Jaws 17, an article titled “Shredding For Charity”, one titled “President Says She’s Tired”, another titled “Queen Diana Will Visit Washington” and finally one reading “Swiss Terrorist Threat”. To be fair, that’s not massively far from the truth, there are too many movie sequels, Hilary Clinton might become the first female American President, people are generally altruistic and recycling, we’ve had a Norwegian terrorist (okay not that close but he was European), and Americans seem to be obsessed with the offspring of Princess Diana, the only things that are way off are the fact that the newspaper is delivered by fax and that it’s priced $6! 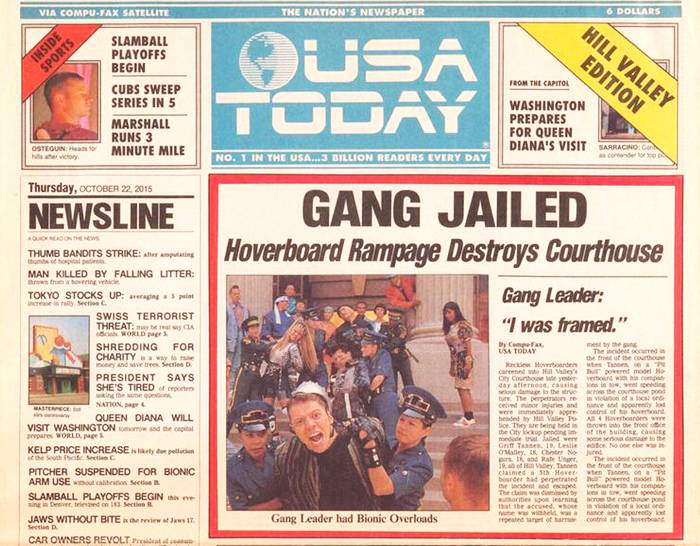 These minor comedic predictions seem to be the only aspect of the movie that has come close to our reality. All the products and all the technology seen in the film still seems futuristic today, and ironically the only attempts at “new looking” products is directly because of Back To The Future itself. Pepsi are releasing limited edition versions of their bottle seen in the Cafe 80’s and Nike auctioned limited edition replicas of those trainers to help with Michael J. Fox’s Parkinson charity, but their promised mass-produced automatic-lacing Nike MAG’s have yet to receive an actual release date. It seems that any product that has actually come to fruition only comes in “limited” quantities just to promote the film’s anniversary, and generally most products being sold today don’t look much different from their twentieth century counterparts. In fact, contemporary aesthetics have borrowed so much from the eighties and nineties that we may as well have stuck with the originals.

The future is never as we envisage in literature, film, and art, in reality it isn’t utopian or dystopian it’s a weird middle ground of mediocrity. It’s never as bad as 12 Monkeys or Escape From New York but it’s never as great as Back To The Future or Bill And Ted, unfortunately the future is more like I Robot, everything looks exactly the same but we’ve all bought into a single piece of pointless technology that makes us more reliant on corporations. The internet and touchscreen mobile devices seem to be the only advance in the last thirty years, there’s still war, there’s still famine, and there’s still disease. We have yet to see an end to starvation, poverty, prejudice, and crime, and this seems to be a never-ending trait of humanity. Will society ever evolve and will life ever get any better?

Predictions of the future seem to be a strange kind of artistic and social propaganda. Just to keep society in perpetual hope we’re all told that tomorrow will be better than today thanks to the evolution of technology, but every time we get to the actual from the predicted, it’s usually a big disappointment. I guess the future will never be much different from the present, once you finally get to move to Hill Dale it isn’t as great as you expected, you may as well have stayed in Llyon Estates.

Look To The Future? 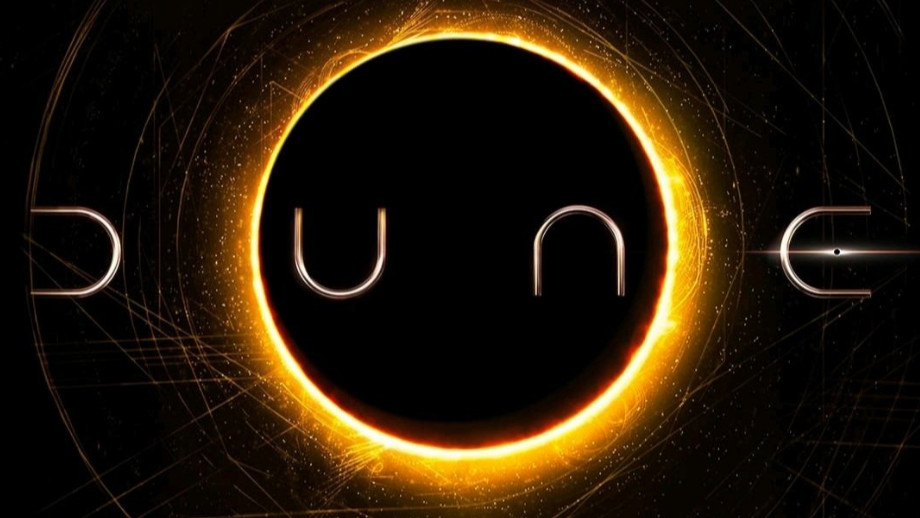