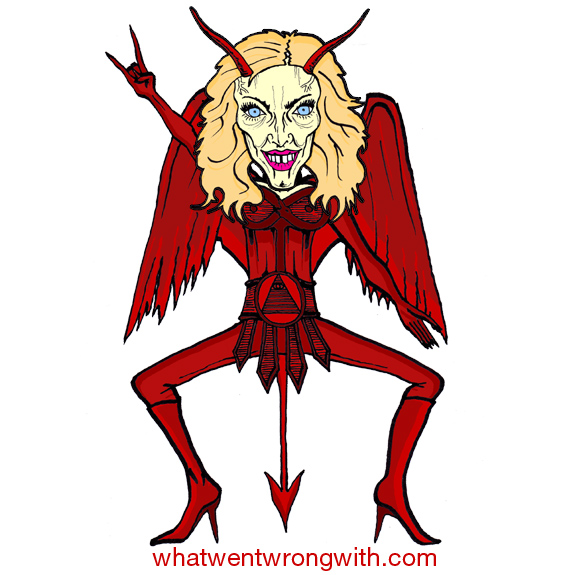 Madonna has always been a strange celebrity creation. She was once very attractive but she can’t really sing, she can’t really dance, she’s never really wrote or composed the majority of her songs,  and yet she is hailed as the greatest female singer and performer of all time. Very similar to singers like Rihanna, these beautiful but talentless hacks seem to attain fans based solely on their looks, and their prettiness seems like a calculated distraction from their mediocre output. Unfortunately for these celebs, since all they have is their looks, at some point when the crow’s feet begin to show and the skin on their neck begins to gather, the magic cloak of sexuality is removed from their music and it’s finally revealed as the sham it always was.

Ever since her self titled album in 1983 (and especially after “Like A Virgin” the following year) Madonna has been sold to the public as the “Queen of Pop”. Judging her solely by her album sales that’s probably correct, but surely even her fans can agree that after “True Blue”, “Like A Prayer”, and “Erotica” her albums have become weaker and weaker. With her ear-drum-damaging vocals in Evita (not to mention her continual bad acting), her songs and albums have progressively gotten worse. And as she whored “Ray Of Light” to Microsoft for a Windows XP advert, fannied about with Sacha Baron Cohen in “Music”, and pissed about with Justin Timberlake in “4 Minutes”, not only did her music become tired and repetitive, but so too did she.

Proving she’s now in the midst of a mid-life crisis (only if she lives to age 112) she now seems to be channelling some inner-wigger. After calling her white son “my nigga” on Instagram, wearing tired-ass SSUR “Comme Des Fuckdown” hats and corny out-of-date grillz, she couldn’t be more contrived and middle-aged if she did a track Kanye West… oh wait she has. If you saw her on The Graham Norton Show a few years ago, it was pretty obvious that everybody around her (including other celebrities) routinely kiss her ass. No wonder she acts the way she does, she’s surrounded by arse-licking yes-men, and it’s in that type of environment that you end up creating soulless mediocrity like “Rebel Heart”.

To be fair, Madonna has always sought out the latest “in” thing in order to market her songs. She has for instance, enlisted the skills of Jellybean, Nile Rodgers, Babyface, William Orbit, Pharrell, and Timbaland for producing duties in the past. Unbeknownst to her and her fans however, she’s always picked these “modern” producers half and sometimes a full decade too late to have any effect on her lacklustre output. Sucking-up to the latest overrated Pop Producer in an attempt at capturing the musical zeitgeist (but failing every time) has been a constant for Madge, and with her latest album “Rebel Heart” surprise, surprise, she’s done it again; this time with Kanye West and Diplo.

“Rebel Heart” opens with “Living For Love”, a song so lousy that it sounds like the recipient of “nul points” at Eurovision. With this song, Diplo proves his production is getting more prosaic by the day, and the song is an unsatisfactory way of opening Madonna’s thirteenth album. But the substandard songs don’t end there, for next up is “Devil Pray” with its Country-ish acoustic intro and some horrid echoing, low-pitch Gregorian chants. The end result sounds like a failed sea shanty and even if you were “sniffing glue, doing E, and dropping acid” this garbage wouldn’t sound any better.

Then it’s “Ghosttown” a nasty, tacky track that sounds like it was robbed from some tween Pop act, and this is followed by “Unapologetic Bitch” a horrendous electronic mess blended with a faux-reggae rhythm. “Unapologetic Bitch” is so bad it makes “Mysterious Girl” sound like “No Woman, No Cry”, and hints of a quick Trap-esque flow and corny air-horns just makes for a horrible addition to this already trashy LP.

The next song “Illuminati” is the epitome of lame middleclass Hip-Pop. Kanye West‘s shitty Fruityloops-style production, which includes some Euro-Pop bridges and some downright disgusting faux-Hip-Hop noises, makes a musical travesty like “Wham Rap” sound like the Wu-Tang Clan. And this isn’t the last time we hear lame Hip-Pop on this album, because then follows “Bitch I’m Madonna” which sounds like it was lifted from M.I.A.’s reject bin. The nasty fast tempo and corny claps are then made worse by Nicki Minaj‘s crummy raps, and this crappy feeling is compounded by the next two shits “Hold Tight” and “Joan Of Arc”. At this point, all this back-to-back shite begins to feel like full-blown aural diarrhoea, and just when you think you’ve wiped your ears clean, next comes “Iconic”.

“Iconic” weirdly includes Mike Tyson doing another “Second Round K.O.” vocal stint, but instead of Canibus we have the overrated-fake Chance The Rapper (someone who loves to continually appear with Pop whores like Madge and Justin Bieber). Absolutely nothing about this track suggests anything “iconic”, and as Madonna whips out her rhyming dictionary, she adeptly inserts the word “ironic” into the following line to form one of the worst couplets in music history.

Then some more back-to-back awfulness…

“HeartBreakCity” is next, and just like the title, there should have been no space for this song on the album. “Body Shop” just like the soap-peddling store of the same name, is a fake-natural, faux-down-to-earth mess (before anybody says anything, I know she was metaphorically referring to a car repair garage and not The Body Shop). Then it’s “Holy Water”; another shit song. Lines like “Bitch, get off my pole” just make you cringe, and then comes the arse-clenching line “Kiss it… don’t it taste like holy water?” The answer to this is surely yes, because just like Holy Water, this track is stale and powerless. And once Maddy has finished hawking back to her heyday by dragging “Vogue” bits into the mix, next comes “Inside Out” a song which comes straight from synth-Pop hell.

The album ends with the song “Wash All Over Me” which sounds like a funeral procession (probably for her career). With it’s “Rain” style themes, this last track makes you want to listen to that old song rather than this one. And even though “Rain” was pretty lame, this garbage is one hundred times worse.

The tracks “Messiah”, “Beautiful Scars”, “Borrowed Time”, “Graffiti Heart”, “Auto-Tune Baby”, and “Addicted” are all utterly atrocious. “Best Night” sounds like some discarded Timbaland beat (it might actually be him for all I know) and “S.E.X.” features some embarrassing fake-Trap-sounding bullshit. The track “Veni Vidi Vici” is a “let’s reminisce over what we used to be” contrived offering, and it also serves as proof that Nas has completely sold-out. There’s also some more fake Hip-Hop from Madonna on this song; proof that Eminem‘s not the only shitty white rapper from Michigan.

The songs “Queen” and “Rebel Heart” should probably have been included on the standard edition if her fans still want that old-school ‘Madonna’ sound. But in an attempt at being relevant, these tracks aren’t present. So as it stands, the album “Rebel Heart” sounds like some decrepit has-been, Fag Hag trying to sound current… and I guess that’s kind of accurate.

So that’s her latest album; pretty much dreadful from beginning to end, but that’s not the only thing that Madonna’s made that’s been getting the internet into a frenzy. Madge (along with her modern counterparts) seem to be in a constant mission to push some kind of satanic-cum-Illuminati imagery on the public. Her latest Brit Award performance for example, had her dressed in a demonic-looking black Armani cape with a bunch of red devil-horned (or conveniently bull-horned) dancers writhing around next to her.

Now before I go on, this contemporary trend for searching for “Illuminati” signs seems to be a great distraction created by the establishment to make you look at symbolism and ignore the real evils of the world. In essence, the Illuminati represent evil rich people who control everything, and to that end I guess it’s true; evil rich people do control the world, just look at Governments, Royalty, and businesses. Illuminati is just a label, I just hate that the public seem to be on the look out for pyramids, eyes, and hand signals in music videos when all the while poor people are being exploited by rich people, we’re all being spied upon, and drones are killing innocent people across the globe (and that’s just a few of the real-life evils of the world).

These celebrities who know full well that this “Illuminati” construct is a great marketing tool for their capitalist agenda, insert more of it into their videos and performances. But whether the Illuminati actually exists or not, it was pretty funny that one of these Illuminati cock-suckers got their comeuppance for once. While attempting one of these Devilish performances at the Brit Awards this year, Madonna went arse over tit in her shitty long cloak. What’s more, her lyrics were hilariously apt for her fall…

“First you love me and I let you in
Made me feel like I was born again
You empowered me, you made me strong
Built me up and I can do no wrong
I let down my guard…”

In the past Madonna’s been a fake Catholic, she’s dabbled in the Kabbalah, so I’m sure she wouldn’t turn down a little devil worship. But similar to Jay-Z and Rihanna, Madonna’s albums such as “Rebel Heart” are so one dimensional and hollow that you realise the satanic symbolism is just a façade to detract from her appalling music. In addition, in order to quash any real debate, her recent song “Illuminati” with Kanye seems to serve a dual purpose; as well as making money for two already rich people and an already rich Record Label, if you type “Madonna Illuminati” into Google (other search engines are available) the top results will now be her lame Kanye West produced song.

So whether she is or isn’t part of the Illuminati, the annoying thing is Madonna’s double-speak on the issue. Despite pissing and moaning about being called “Illuminati” by the public, similar to Jay-Z (yet again) she keeps promoting the Illuminati aesthetic with everything she does. I mean if they don’t exist, why call them “enlightened” in a Rolling Stone interview, does that not in turn confirm their existence? Also, why claim that you’re somehow saintly and non-satanic when every stage show you give these days resembles a demonic ritual? I mean Madonna’s performances couldn’t be more satanic if she was dripping in goat’s blood and spinning anticlockwise on a pentangle (although I’m sure one of her concert Director lackeys are working on that).

What Madonna needs to realise is the real reason we think she’s satanic is not because of her horned dancers at the Grammys and the Brits, or her Baphomet stance complete with golden crown at the Superbowl, it’s because these days her albums are so crap that they sound better when they’re played backward, and with her wrinkly skin, wizened face, and pointy nose, she looks like a fucking witch.

Not that Mad On Her any more.