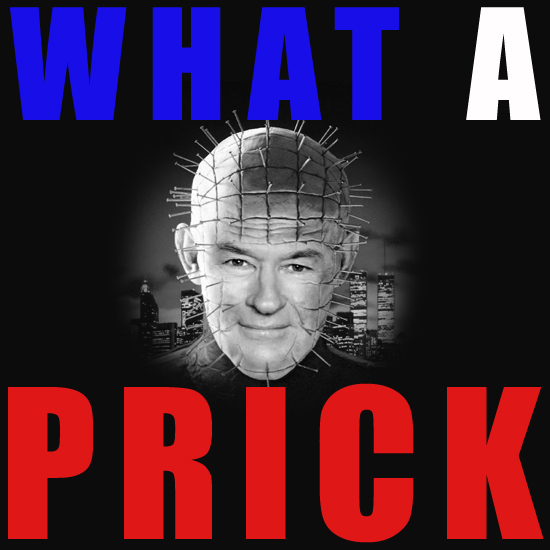 Bill O’Reilly is arguably the most hateful, the most prejudice, and the most talentless host working on television today. With his smarmy yet baffled expression, thinning hair, and wrinkly pale skin; he sits on his Fox News TV Show looking like a maggot in a suit spewing his Right-Wing bullshit to a bunch of idiotic extreme-right viewers.

Fox News for those who don’t know, is home to a set of weird looking old farts who seem to be living in an alternate dimension where America, as far as I can gather; was founded by hard-working heterosexual Caucasians who just magically sprouted up from nowhere holding some tools and a Bible. In their world, a multitude of middle-aged Republicans built everything you see today, Slavery didn’t exist, Native Americans didn’t exist, and America itself was handed over to these Kaucasian Khristian Kretins by God himself in around 1492.

Bill O’Reilly’s show; The O’Reilly Factor opens with this bygone wanker exclaiming “Caution: You are about to enter the No-Spin Zone!”, after which he spits his hate-filled hackneyed trite through his nasty under-bite and sagging chin for around sixty God-forsaken minutes. Tune in to this show, and in any given day you can catch this tit reading crappy “news stories” on how Muslim Terrorists, Mexican Immigrants, Homosexuals, Black Criminals, and even the Democrats are all plotting to destroy his white, picket-fenced, All-American home.

Bill usually begins his show with the amazing segment; the “Talking Points Memo”, whereby this geriatric dick reads out what is simultaneously displayed on screen. So as he yells something along the lines of “border, border, border, terror, terror, terror” it is also shown as text alongside him, proving that the attention span and intelligence of his audience is so poor; that any information has to be correlated and relayed twice.

The “Memo” segment is then followed by some shitty story which furthers Bill’s expedition into the land of bigotry. And while you journey into the depths of discrimination with him, you can forget about the bias and slant of these stories; because anything this cock tells you can be “proved”. How? By dubious-looking statistics and fake-looking polls, that’s how. And if not, Mr. O’Reilly can turn to some arsey contributor to backup his hate-filled garbage. On the day that I watched the show, it was the fatter, wrinklier, and more balding Karl Rove. Wow, how attractive Bill O’Reilly looked compared to this overweight slug, and how intelligent he looked next to Bush’s Senior Advisor and Deputy Chief Of Staff. Surely everything O’Reilly tells us is correct when it’s backed up by this pudgy pundit with prodigious political predicting powers?

After the tête-à-tête with Rove, it was live to the craptastic stand-up Dennis Miller, to whom O’Reilly sat in awe of, as though Miller’s slurred bullshit was the funniest thing he ever heard. Then it was onward and downward to another story; something to do with white Republicans being hard done by. And as Bill sat there thinking he was smart and amusing, pointing and waving his pen trying to look intelligent, talking over people like a moaning child having a Right-Wing tantrum, I recalled his appearances in films such as Iron Man 2 and Transformers 3. It’s weird but these dickheads who call themselves journalists read out fake stories in movies with the same straight-faced expression and the same vigour as they do on supposed News Channels. It makes you wonder, can we believe anything these wannabe starlets ever tell us? But I digress; back to O’Reilly’s prejudicial points of view. Here’s a quick glimpse into his hate I found scattered all over the net…

“There’s no Kwanzaa symbol. Maybe; is there a 50 Cent that we have to put up or something? Is there a Kwanzaa symbol? What is that? It’s a candelabra like Liberace had? Alright, we’ll put that up, too. I don’t mind”

On the Black Panthers (and comparing them with White-Supremacist David Duke):

“…You were promoting your people, black people, and he’s promoting white people. So what’s the difference?”

“She was 5′ 2”, 105 pounds, wearing a miniskirt and a halter top with a bare midriff… every predator in the world is gonna pick that up at two in the morning”

“why wouldn’t nature then make it that anybody could get pregnant by eating a cupcake?”

On the ban of Irish gay groups from the New York St. Patrick’s Day Parade:

“But I don’t want these people intruding on a parade where little children are standing there, watching.”

“the most unattractive women in the world are probably in the Muslim countries.”

“For every Muslim in the world that wants democracy and wants human rights, there is one who doesn’t. And the one who doesn’t, doesn’t have any rules. And it will blow the hell out of the one that does.”

“The USA has poured trillions of dollars into the Muslim world. Fighting wars in Iraq and Afghanistan designed to liberate those people from tyrannical governments. But apparently vast majority of Muslims are not grateful.”

…Oh my White Male God, it’s like we just stepped into a Neo-Nazi, Ku Klux Klan Convention. Back to this fucker’s show.

In the tantalising last minutes of the The O’Reilly Factor, Bill begins peddling his crappy books from his shit-stained online store. Hey if you become a premium member; you’ll get one book free! Great if you’re running out of toilet paper. And get this, he’s also written books specially aimed at kids; and the topics are Lincoln, Kennedy, and wait for it… Jesus. Thanks Bill, now I can indoctrinate my kids with tales about this great white American Triumvirate.

After plugging his amazing literary works, O’Reilly reads out and responds to suspect-looking e-mails, smirking and thinking he’s witty during his pointless comments. In this “light-hearted” closing there’s also a “Tip Of The Day” and a “Word Of The Day”, so in an homage to the show and the man himself, let’s do the same:

Today’s Tip Of The Day is; when bringing up the horrors of Immigration and Islamic Terror, it is best to ignore that Bill O’Reilly’s ancestors are Immigrants from Ireland and that terrorism has existed in Northern Ireland since the early twentieth century. And to follow on from this, the Word Of The Day is; Irony.

As the credits roll on the O’Reilly Factor, don’t forget to note the great final bit of info…

…Just in case you want to dress up a like this cunt on Halloween or want to make an accurate effigy to burn on Columbus Day, Independence Day, Cinco de Mayo, Thanksgiving, or on any day when it’s satirically appropriate to set fire to a statuette of this racist prick.