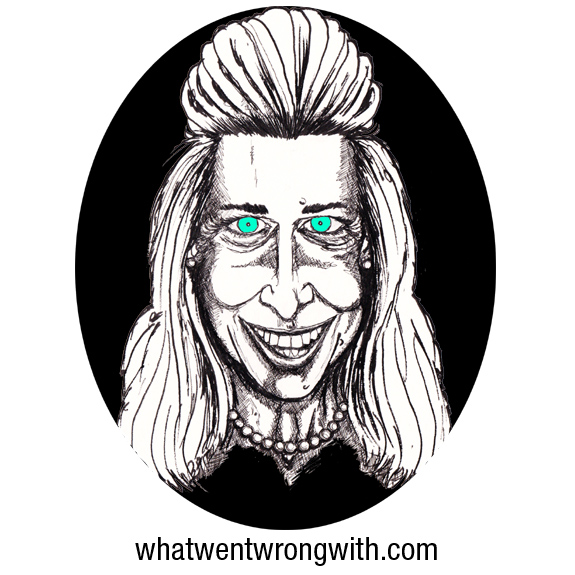 Katie Hopkins is an odious right-wing mouthpiece who constantly pops up on television like a hate-filled wack-a-mole; the viewer dying to cave her prejudice head in every time she opens her vile gob. Change the channel and there she is again, on some sofa or on some panel, infecting the atmosphere with the stench of hatred. Her points of view usually echo the likes of Enoch Powell, and we the viewer are left baffled and incensed as to why this witch is allowed so much airtime on so many shows.

For somebody allegedly born in 1975, it is shocking that both her opinions and looks resemble someone who was birthed in 1875. Her poncey prejudice points of view have to be heard to be believed, but when you see them spoken through her drooping asymmetrical snobbish lips they seem to sound exponentially worse. With her constant evil yet bemused smirk and perpetually sweating philtrum, it looks as though Hopkins herself is surprised how far she has got with such little talent. This serial Reality TV whore started her “media career” on The Apprentice with Alan “I’m a bigshot ’cause I sold one VCR in the 80’s” Sugar. From there she has been leap-frogging between one shit show to another, even getting married on Sky Living’s Four Weddings and also appearing on the animal-cruelty-fest I’m A Celebrity.

It is however, when she is given the role of spokesperson or panelist rather than a contestant that she is at her most annoying. Her horrid views have been aired on many shows, and over the last several years she has spewed her venom on countless TV programmes from the dull as dishwater The Wright Stuff, the wannabe-youthful 10 O’Clock Live, the noughties shitfest The Friday Night Project, the shit-stained 8 Out Of 10 Cats to the fakely impartial Question Time. Giving this arsewipe a voice when the only thing that comes out of her cake-hole is prejudice; is tantamount to speaking the words themselves. Fuck Channels 1 through 5.

Hopkins’ targets are the usual suspects; minorities, and the following quotes I found on Huffington Post show what her evil mind thinks about…

“Highlights from the Women’s Final. 2 mins worth of programming. Remind me why women are paid the same prize money as men”

“Jayden, this is not your maths homework, this is your Mega Bingo card’. ‘It’s numbers innit?”

“Any school lost property box. Always filled with uniforms labelled for Charmaine and Chardonnay. But misspelled.”

“Compare the Telegraph births column with a list of names coming up before magistrates each week. Tell me I don’t have a point.”

“When you go out tomorrow and the tax man takes x% of your earnings, imagine handing those in person to Quatada’s wife and 5 kids”

“Ch 4 broadcasts Islamic calls to prayer for Ramadan. A 30 day reminder that minority rules in the UK. Any more PC, it’d be a bloody laptop”

“Off to buy Loud Hailer. When Ch4 broadcast Islamic call to prayer, I am going to counter with ‘Onward Christian Soldiers’ in protest.”

…And finally The Scottish:

“Life expectancy in Scotland based 07/08 birth is 59.5. Goodness me. That lot will do anything to avoid working until retirement.”

Until this last tweet coincided with the helicopter crash in Scotland two weeks ago, everybody in the media was fine with this repugnant bitch spouting hatred on mainstream television (and on the internet). We have had to endure this snobby twat since 2006, but it was only until the public started a petition did anybody take action against her. Just goes to show how horridly right wing the broadcasters themselves are, and also how blind the public are to prejudice; after all, this racist cunt was only sacked once white people realised she was also prejudice against other white people.

For someone who was a contestant in The Apprentice, Hopkins seems more successful at getting fired than getting hired. Managing to get fired from The Met Office and finally being fired from This Morning, each of her “careers” seem to be as short and as pointless as her crappy e-book The Class Book Of Baby Names.

With a face resembling a melting candle with drooping globules of haggered skin culminating in a sagging neck; I hope I don’t have to be subjected to her ugly mug ever again.