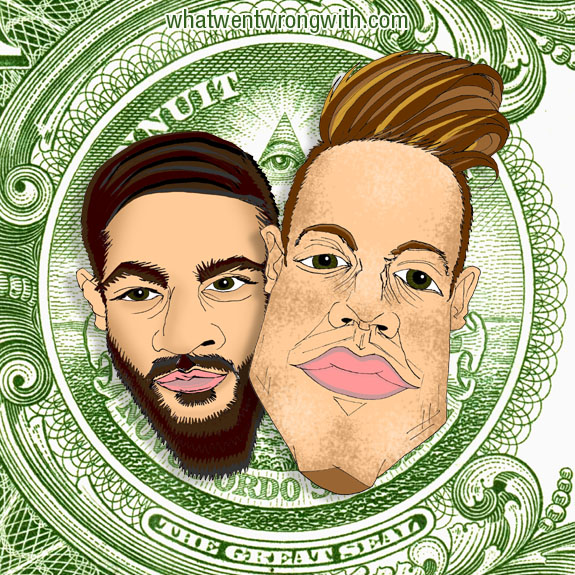 Hip-Hop as a genre has completely sold out over the last decade and become a mass advertisement for clothing labels and expensive objects. The majority of rappers these days are constantly, both lyrically and visually, promoting products which are out of reach for so many working class fans. It seems in such poor taste to use an art form created by the underprivileged and poor to be so consumerist-led.

Every time you turn on MTV or BET you see somebody flashing their kicks, their wrists, or bragging on their fucking whip. It has now got to a point where even a music video set in “the hood” like A$AP Rocky’s “Pe$o” is juxtaposed with lyrics concerning $1000-$2000 Rick Owens’ overpriced, shitty garments. Rappers like A$AP Rocky even wear a $400 Ann Demeulemeester dress under the guise of “swag” in television appearances. The irony that more people will be navigated to this article because of these bullshit clothing labels than people concerned with the actual topic; shows what kind of culture Hip-Hop thrives in.

For people sick of hearing lyrics which promote the worshipping of money and high-end fashion, there was rappers like Macklemore who with tracks like “Wings” and “Thrift Shop” rejected this contemporary culture, clogged with clothing label promotions and product placements. Rappers like Macklemore seemed to be a part of a slow resurgence in counter-culture; whereby Hip-Hop finally rejected the construct of a consumerist-led music industry.

But only a few moments after “Thrift Shop” was released, I saw an NBA All-Star Weekend Promo which takes Macklemore’s own song “Wings” (which denounces the buying of products such as Nike Air’s) and instead removes any lyric which is seen by the NBA as offensive to their long-term partner in crime; Nike.

So we now have essentially a protest song, an anti-Nike protest song, chopped and edited to promote a pro-Nike National Basketball Association. Now this on its own would be bad enough; but Macklemore appears in the promo himself with the full knowledge (I assume) that the finished product will be a pro-NBA (and therefore pro-Nike) video. This is one of the quickest examples of selling out I have seen in recent years. Somebody who makes their constant visual aesthetic and lyrical content anti-mainstream and anti-consumerist should be the last person in such a promo, but I guess there is no credible musician left.

So now I’m back to listening to The Coup’s “I Love Boosters”, waiting once again for a new artist to (for once) practice what they preach and stay true to their own message without relenting to the pressure of consumerism, A&R bullshit, kick-backs, marketing, and tie-in sales. Maybe Ryan Lewis and Macklemore should have listened to their own sentiments from “Thrift Shop”…

“Let’s do some simple addition,

A few Dollars to edit your lyrics…

I call that getting swindled and pimped shit,

I call that getting tricked by a business.”