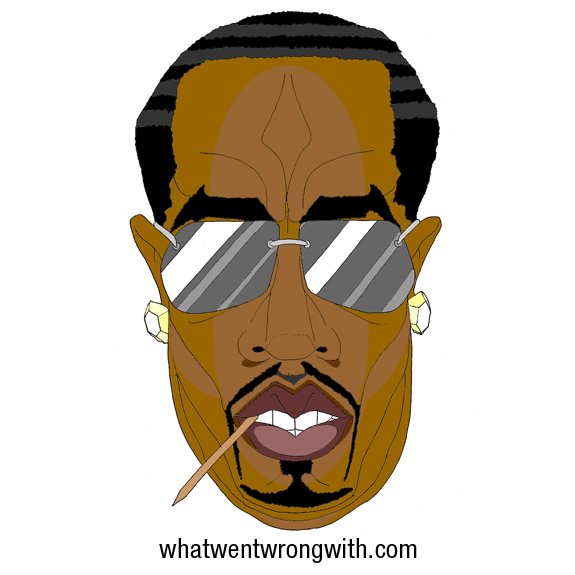 Whatever his stage name, Sean Combs will forever be remembered as the ruin-er and cheapen-er of Hip-Hop and Rap. From his early days trying to worm his way into music videos for the quick cameo, all the way to becoming the wannabe restaurateur, clothing designer, and celebrity-obsessed whore he is today, Puffy has always had an eye and ear for the cheap and tacky. He became famous for sampling lame eighties pop, his mundane rapping skills, and his shiny-suit wearing fish-eyed music videos in the late nineties, and to this day, he parasitically appears in remixes of popular Hip Hop and R&B tracks and then feeds off the proceeds with his “ughh” and “yeahs” appearing in countless backing tracks like a fame-hungry Tourette’s sufferer.

Suge Knight was right; never has a producer and record executive appeared in so many of his own artist’s videos. Hungry for recognition, he makes rappers famous and then “features” in their song and video only to increase his own profile in the music business. It’s a wonder why anybody would want to sign with Puff, since he’s famous for luring, nurturing, then abandoning numerous acts. And judging from his past Bad Boy signees it could be said that working for Puff can leave you potentially cursed. Just ask Shyne (in prison), G Dep (in prison), Loon (arrested), Notorious Big (murdered), Craig Mack (forgotten), The LOX (tried desperately to leave), and Ma$e (left the business).

Once Biggie died, he’s desperately tried (and subsequently failed) to find a follow-up. So some time in the early noughties, he gave up looking for a prodigy cash-cow, and instead decided to stick his mug in as many sectors of the entertainment industry as possible. And like many people who reside in the vacuum of entertainment, surrounded by “yes-men” and kiss-asses, he now thinks he is the king of music and the master of style. In his own deluded mind he is an entrepreneur and style icon, in reality however, nobody with any credibility thinks he’s credible, and anybody with any sense stays well clear when he asks to “appear” in their track or video. The only gains made from an appearance by P Diddy is by P Diddy.

Diddy is a legend in his own mind with delusions of grandeur who thinks he invented the remix. What he has invented is Hip-Pop, mediocre rap, and fake sentiments. After all, who would hire a ghost writer (Sauce Money) to pen lyrics for a track dedicated to a deceased friend (I’ll Be Missing You)? Puff thinks that everybody in the Hip-Hop community respects him, but somebody who works in a genre only to increase his own bank balance does not warrant any respect. In the Illustrated Dictionary of Dicks, he appears under “sellout”.